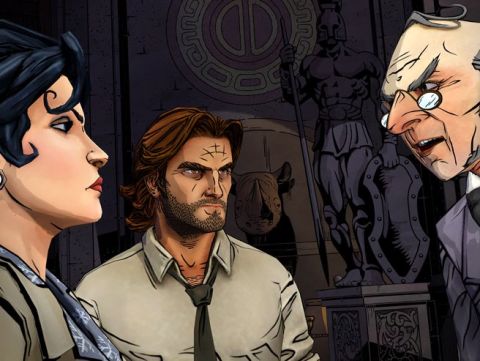 If "Episode 1 — Faith" is anything to go by, "The Wolf Among Us" will be every bit as gripping as the "Fables" comic series.

If you've been following "Fables," the long-running comic-book series from author Bill Willingham, artist Mark Buckingham and the DC Comics Vertigo imprint, you know what comes next: The Big Bad Wolf, calling himself Bigby, becomes a chain-smoking, hard-drinking sheriff for the wayward characters (called "Fables"), fighting a losing battle to keep the peace among the displaced immortals.

Now, Telltale Games — the adventure-game developers behind the acclaimed adaptation of "The Walking Dead" — has given Bigby the starring role in its latest game, "The Wolf Among Us." This downloadable gem is available for the PC, PlayStation 3 and Xbox 360, and retails for $4.99.

If "Episode 1 — Faith" is anything to go by, Bigby's on-screen career will be every bit as unpredictable, heartbreaking and gripping as his turn on the page.

"The Wolf Among Us" hearkens back to tropes from classic adventure games such as "The Secret of Monkey Island" and "King's Quest." You'll play as Bigby, and will spend most of the game conversing with other Fables, investigating crime scenes, picking up items and solving puzzles. The gameplay mechanics are very simple by today's standards, but they do exactly what they need to do.

Every now and then, "The Wolf Among Us" breaks up the routine with an action scene. "Episode 1 — Faith" includes two fight scenes and one chase, and the mechanics are very similar for both.

You'll need to dodge attacks or obstacles with quick swipes of the analog stick or mouse. You can fight back, or pursue your foe, by quickly highlighting pieces of the environment (such as a ledge from which to dangle or a barstool to swing) and completing a simple button prompt.

These quick-time events are the closest thing to the traditional gameplay that "The Wolf Among Us" boasts, and they can often be quite punishing. You'll have only a split second to see the button prompt and react, and you'll often miss your cue. One flub won't end the game, but the action scenes can be quite jarring for a game that is otherwise very evenly paced and measured.

Beyond that, you'll spend most of your time talking with other characters. This is where the game excels. Bigby usually has four possible responses to any conversation, and you have only a limited time to pick one. The time varies depending on the situation: You have a long time to respond to Snow White during a taxi ride, but only a few seconds to tell off Ichabod Crane as he storms out the door.

Although the game is only about two hours long, it boasts a fair amount of replayability because your dialogue and investigation choices alter the story considerably.

People can live or die, get captured or go free, or respect or despise Bigby based on your decisions. Just keep in mind that your story choices will carry over into the next four episodes, so choose carefully.

Although "The Wolf Among Us" is based on the "Fables" comic series, it's absolutely not necessary to read the books before diving in. The game tells a prequel story where Bigby Wolf must solve a grisly murder that takes place right on his doorstep.

Along the way, Bigby encounters a number of other Fables from the comic series, as well as a few new ones: the businesslike Snow White, the cantankerous Ichabod Crane, the callous Woodsman and the violent Tweedledee and Tweedledum, among others.

The story moves along at a brisk clip, and you have considerable control over how it plays out. You'll choose how much time to spend investigating each location, where to head next and how to deal with each character. You can play Bigby as a compassionate detective who bends the rules — or as a thug who gets the job done by any means necessary.

Next Page The Wolf Among Us Review - Art, Graphics, Music - Tom’s Guide