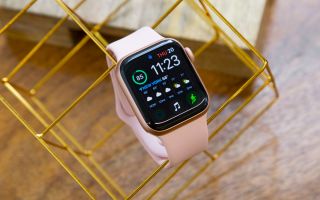 Our favorite smartwatch is finally getting a noteworthy discount.

Walmart and Amazon are taking up to $54 off the Apple Watch Series 4 (40mm) GPS . That's one of the best Apple deals we've seen this year. (The current-gen Apple Watch has been on sale before, but usually just a modest $20 off). There's a small chance these models may be a few bucks cheaper on Amazon Prime Day, but for the moment — these are the lowest price we've seen to date.

The discounts are on all Apple Watch Series 4 models — from the GPS only models to GPS/LTE. The only model that doesn't have a $50 discount is the 40mm GPS/LTE, which is actually pricier than the 44mm GPS/LTE. (Needless to say, we recommend opting for the larger display). Deals include:

The Apple Watch Series 4 is hands down the best smartwatch you can buy. The new series features a bigger display (no more bezels), thinner case, faster processor, and more advanced sensors.

The 40mm model packs an OLED screen with 394 x 324 resolution, whereas the 44m model features a 448 x 368. Both screens are visually better than even the largest Series 3 model.

Although I've been anti-smartwatch for years, I've been wearing a 44mm Series 4 since November and have grown to love it. I wear it while running outdoors, while swimming laps at my gym's pool, and just about everywhere I go. I particularly like how the watch senses what activity I'm doing and automatically starts recording my workout, whether I'm on a treadmill or a rowing machine.

Battery life, however, could be better. I'm usually at 60% by the end of the day, which means I'm charging it every night. (Fortunately, it charges very fast).

The watch's EKG capabilities are fun, but not something you're like to use everyday. That said, get this watch if you lead an active lifestyle and like keeping track of your workouts in the most stylish way possible.