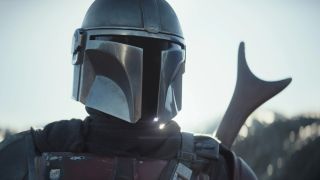 The first season of The Mandalorian has wrapped up on Disney Plus, leaving us Star Wars fans salivating over what adventures lie ahead next for Mando and The Child (aka Baby Yoda). The season finale of The Mandalorian set up some interesting plot threads for a sophomore season, and while details are currently thin on The Mandalorian season 2, we can piece together some possible cast members and story beats based on the first run of episodes.

Here’s everything we know about The Mandalorian season 2, including its possible release date, directors, cast and plot.

Warning: This post contains spoilers for season 1 of The Mandalorian!

The Mandalorian season 2 doesn’t yet have an official release date. However, showrunner Jon Favreau tweeted that season 2 would launch in the fall of 2020.

At a press conference attended by Cinemablend earlier this year, Favreau confirmed that filming for the second season was already underway as of fall 2019.

The Mandalorian season 1 was largely written and executive produced by Jon Favreau (with contributions from Dave Filoni of The Clone Wars/Rebels fame and Christopher Yost), though several directors took the helm for different episodes. The first season’s directors included Filoni, Rick Famuyiwa, Deborah Chow, Bryce Dallas Howard and Taikia Watiti, and we expect Favreau to take a similar guest-director approach for season 2.

As reported by SlashFilm, Favreau confirmed that he will be directing at least some of The Mandalorian season 2 himself.  He also noted that Carl Weathers, who also stars in the show as Guild leader Greef Carga, will be getting in the director's chair for an episode.

While Disney has yet to confirm The Mandalorian season 2 cast, it seems safe to assume that Pedro Pascal will reprise his role as The Mandalorian/Din Djarin. Same goes for Gina Carano as former shock trooper Cara Dunne, as well as Carl Weathers as bounty hunter guild leader Greef Karga. We also expect to see Giancarlo Esposito return as the villainous Moff Gideon, as well as Emily Swallow as Mandalorian leader and weapons forger The Armorer.

According to Favreau's tweet, we can also expect at least one Gamorrean, whose most notable action in the Star Wars films was being eaten by a Rancor in Jabba's palace in Return of the Jedi.

Oh, and whoever does the puppeteering and adorable child noises of Baby Yoda will certainly be back.

The Mandalorian season 2 plot: what to expect

We don’t have an official synopsis for The Mandalorian season 2 just yet, but the season 1 finale sets up some obvious plot threads. Season 1 ends with Din Djarin setting off with The Child to find its homeworld and hopefully discover the mysterious, tiny green species that it and Yoda belong to. That could set up some very interesting interactions and huge universe-spanning revelations, and may set the stage for more Force wielders -- and even Jedi -- to make an appearance in Season 2.

Meanwhile, we know that Greef and Cara are sticking around on Nevarro, and that Greef would like Cara to be his enforcer within the Guild. That should lead to some fun and dysfunctional buddy-cop action, especially since Cara doesn’t seem too fond of the grizzled old bounty hunter.

We also know that Moff Gideon survived his TIE Fighter crash at the hands of Din and is packing a deadly Darksaber, which could make things very hairy for Greef and Cara. Gideon possessing the Darksaber is significant, as the unique, black-light lightsaber was first forged by Tarre Vizsla, the first-ever Mandalorian Jedi. Here's hoping we get some backstory as to how Gideon got his hands on one.

Emily Swallow’s the Armorer, the Mandalorian clan leader that forges Din’s armor, seems to have survived the Imperial attack at the end of season one, so it seems likely we’ll see her return -- possibly to team up with Greef and Cara.

It’s worth keeping in mind that The Mandalorian season 2 should push us further into the timeline towards the events of Star Wars Episode VII: The Force Awakens. While this is purely speculative, this could allow Favreau and crew to give us a look at the origins of both The First Order and The Resistance from Din’s point of view.