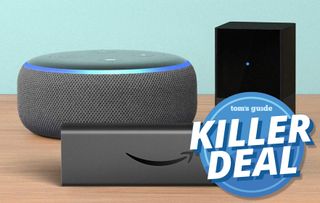 Amazon's December deals are in full swing, and the retailer is pairing our favorite pint-sized smart speaker with other products that work with Alexa. For a limited time, Amazon is taking up to 59% off its best Echo Dot bundles.

Currently, you can get the Echo Dot with TP Link Smart Plug Bundle for $29.99. Normally, this bundle would cost you $72.89, so that's $43 off. It's the lowest price we've ever seen for this Echo Dot bundle and one of the best smart home deals you can get right now.

Amazon's third generation Echo Dot features a charcoal fabric cover and vastly improved sound over its predecessors. The TP-Link smart plug included in this bundle lets you turn electronics on or off using Alexa or an app on your smartphone.

In our Echo Dot 3rd Gen review, we loved its nice design and great sound. We gave it an overall rating of 5 out of 5 stars and awarded it Editor's Choice.

As an alternative, Amazon offers another Echo device bundle deal in the Echo Show 5 w/ Ring Video Doorbell Bundle for $139 ($150 off). This smart home kit makes it easy to see, hear, and talk to visitors at your front door.

For more holiday sales this season, be sure to check out our best Amazon deals coverage.