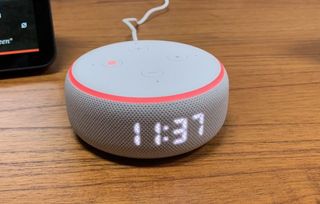 We don't expect to see Black Friday Amazon deals for another few weeks, but just days after announcing 14 new products, Amazon already has a deal on one of its forthcoming Alexa devices.

For a limited time, you can preorder the All-new Amazon Echo Dot with Clock for $49.99. That's $10 off and the lowest preorder price we've seen for it. The discount applies to the Sandstone color only.  Need two Echo Dots? Best Buy offers the same deal and will take $20 off when you buy two. It's one of the best smart home deals we've seen this season. (And a good indication of the type of Black Friday deals we'll see in the coming weeks).

In our Amazon Echo Dot with Clock review, we liked its built-in clock, ability to show temperature or timers, and good audio quality. Although there are no manual controls to adjust the display's brightness, the Echo Dot with Clock is a small but clever improvement on the previous-gen Echo Dot.

The Echo Dot with Clock looks identical to its predecessor. It has the same hockey-puck shape, rounded top, and four buttons.

The LED display that pops out from beneath the Echo Dot's fabric shows the time by default. However, when you ask Alexa for the weather, the display briefly shows the current temperature. Alternatively, when you ask Alexa to set a timer, the face will show a countdown timer with the remaining time left.

The Echo Dot with Clock also has a built-in light sensor, which automatically dims its display. But if you want it dimmer or completely off, you can also ask Alexa to do it for you.

The Echo Dot with Clock is an affordable option if you want a smart speaker with alarm and timer functions. Preorders will ship on Oct. 16. Meanwhile, the 3rd-Gen Echo Dot (sans LED screen) is on sale for $39.99. However, this model will like drop to $20 or less on Black Friday.