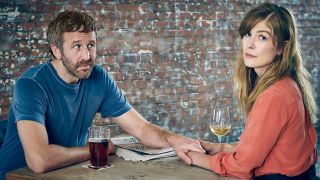 UPDATE: September 11 - This week's recommendation is State of the Union, a short comedy series starring Chris O' Dowd and Rosamund Pike. Read more about it and our other favourites below!

iPlayer contains the vast majority of the BBC’s TV show output from the last 30 days, plus a few select shows that get to reside on the service for much longer. We’ve pored through the contents of the service, in order to show you what’s new, and what the highlights from the BBC’s archives are.

State of the Union

Each week before their marital counselling sessions, Louise and Tom meet in a pub to discuss what’s been happening recently. This ten-part series of ten minute episodes distills huge amounts of family drama into a single scene, and still manages to be funny and hopeful in spite of the mistakes these two characters have made.

The semi-historic crime drama moves into the years of the Great Depression. While Tommy, the leader of the Shelby crime family, has gained considerable power since the first series, he still finds he’s vulnerable, both from the state of the world’s finances and his own past.

Bob Fosse was an eminent theatre director and choreographer in the 1960s, and Gwen Verdon was an equally talented dancer and actress. This eight-part series follows the pair as they work together and grow closer and further apart again, interspersed with musical numbers taken from the productions they worked on, including Caberet, Chicago and Sweet Charity.

Stacey Dooley - Face to Face With the Bounty Hunters

Travelling to the USA once again, Stacey Dooley follows the people who track down fugitives for a living. We see how the system works from all angles: the hunters’ efforts to track their targets, the bondsmen who hire them to retrieve their loaned money, and the family members who are often tasked with helping and paying for the bounty hunters if their relative goes on the run. It’s a culture that’s completely alien to most UK viewers, and having the excellent Dooley as our guide helps enhance an already fascinating topic.

The final series of this period drama has just begun airing, so don’t miss out if you’ve been following the series over the past few years. If you’ve not been paying attention, the show’s all about Ross Poldark, a soldier who returns from fighting in the American War of Independence to find that his old life in Cornwall is in a terrible way. His father is dead, his fiance is married to another man and the family estate is in ruins. He sets about fixing everything, while also dealing with the schemes of his rivals and trying to find love again.

After previous visits to the Westboro Baptist Church in 2006 and 2011, Louis takes us back one more time to see what’s changed in the past eight years. The founder’s death and the defection of his granddaughter are two major events which damaged the group’s integrity, but we’re also shown how it still attracts new members, and how its aggressive rhetoric is no longer a unique feature in modern political discourse.

For the 50th anniversary of the Apollo 11 Moon landings, the BBC’s offering this documentary series about how that came to be, starting from the beginning of the ‘space race’ with the USSR launching Sputnik, the first artificial satellite. Each step forward either by the Americans or the Russians pushes the other side to respond, as the satellites become more sophisticated spacecraft carrying the first astronauts and cosmonauts, aiming at becoming the first to reach the moon. We all know how it ends, but the story remains gripping.

Want to see what’s about to expire on iPlayer? Check our iPlayer leavers page

From all across iPlayer, we’ve brought together some shows that have a longer shelf life, so you’ll be able to enjoy them across a longer period of time. Or know that they’re here waiting for you if you get the binge-watching urge.

After the end of the First World War, Thomas Shelby returns home to Birmingham to take his place once more in the criminal gang his family leads. Shelby and his associates manage numerous criminal enterprises around the country, while also dealing with rival gangs and the authorities. The show’s not a normal historically accurate drama, but one which moves events and people around as it pleases in order to tell an exciting gangster story in a period setting.

Killing Eve
If you haven’t watched this show before now, it’s an ideal time to start, because the second series has just appeared on iPlayer. The show revolves around Eve, who works for MI5 (in the office at least), and Villanelle, a talented but young assassin. As Eve gets drawn into the hunt for the killer of multiple prominent figures, and Villanelle grows aware of this investigation, the two women end up in a rivalry that endangers both of their missions.

Jodie Whittaker’s turn as the 13th Doctor is the best looking series of the regenerating sci-fi show yet. This is bad news for anyone who prefers the Doctor to be running around a disused quarry pursued by a man covered in tinfoil, but the new approach means that, combined with the show's trademark mix of warmth and high stakes drama, the new series is great fun to watch. But don’t forget about the last four Doctors though. All episodes broadcast since the revival of the series in 2005 are available too.

If slightly off-the-wall cop dramas are your thing then you’ll love Idris Elba in Luther: the iPlayer has all five series, including the 2019 one. It’s a bleak show: the crimes are abhorrent, the police are far from your traditional ‘good guys’, and Luther rushes headlong into trouble every time. You’ll still enjoy it for its twists, schemes and Elba’s performance though.

Now into its sixth series, this spin-off from the successful Tracy Beaker series still takes place in a children’s foster home, following a wide group of kids as they deal with life, growing up and finding foster parents. If you still want to watch the antics of Ms. Beaker, then you can also find all the episodes of her original show in the same place.

DIY show, in which kids’ dream rooms or dens are built by a team of creative and talented designers. These are often made to reflect the lucky child’s hobby or career aspirations, and are quite frequently exciting enough to make even an adult viewer quite jealous.

Children from all across the UK film a documentary about family members, friends and themselves in this series, to explain what it's like living with different health conditions, pursuing unusual hobbies or living in strange places.

For online-only BBC content aimed towards a more youthful audience across all genres, BBC Three is the best place to look

The extended Lyons family live in Manchester in the near future. While the world is still recognisable to us, it’s for all the wrong reasons. The family, plus political candidate Vivienne Rook, go through a lot of difficulties (or cause them in some cases), but their senses of humour stop this show from becoming just a pessimistic Black Mirror-style projection of our current technological and political fears and show that normal people still exist in this unfamiliar time.

The title of this drama series is based on the nickname of the 19th century Yorkshire industrialist Anne Lister, while the script is based on her lengthy coded diaries. Anne may have been a wealthy woman during a time when gender expectations were notoriously strict, but that did not stop her from cultivating her family business, and openly pursuing relationships with other women. It’s a period drama, but with a main character like no other.

A comedy drama featuring not one but two high-profile leads in David Tennant and Jessica Hynes, is a warm but honest look at the lives of a family where one child has profound learning difficulties. Tennant in particular is very good: if you’re used to him chewing the scenery as Doctor Who you’ll find him hardly recognisable here.

A companion series to the motorcycle gang drama ‘Sons of Anarchy’, this time from the perspective of the rival gang, the Mayans. ‘EZ’ Reyes leaves prison to join the Mayans like his brother Angel, the pair fighting against the gang’s leadership as well as a drug cartel. Our heroes are likeable and good people, but find themselves with no choice but to live a life of crime.

Many of the shows starring the BBC’s chief investigator of the strange are available to watch on iPlayer. Start at the beginning with Weird Weekends, see his more recent work in the Altered States series, or dive into his highlights, such as his brushes with the famous and infamous in ‘When Louis Met…’, or his LA Stories, examining different sides of the City of Angels.

Over five episodes, Professor Brian Cox guides us in his usual in depth but accessible manner through the members of our solar system. Starting from Mercury, and ending with the often debated Pluto, we visit each via space probe images and computer graphics, both giving the viewer a suitable sense of wonder.

Looking for some movies instead of TV? iPlayer’s film section has you covered

What We Do in the Shadows

A group of vampires living in an old house on Staten Island open up their door to a documentary crew to show what life as a supernatural being is like. It turns out it’s full of petty squabbles about ‘dinner’ and occasionally remembering their long standing mission to take over the New World. Based on the film of the same name, this series takes place in a new location and with a fresh cast, but cuts traditional horror elements with slice of life comedy just as skillfully.

An anthology series featuring half of the League of Gentlemen. Shearsmith and Pemberton tell us the peculiar tales which go on in places bearing the number ‘9’. Sometimes scary, but always funny, this is a show you’ll want to watch through again as soon as you've finished it, just to see how the answers for each episode’s twist were hidden in the dialogue and the characters' innocuous actions.

After a hiatus lasting over two years, this fantastic comedy written by and starring Phoebe Waller-Bridge has a second and final series. Fleabag is the uniquely self-aware character through whom we see the action play out, her asides to the audience putting a spin on an already finely composed script that shows both the humorousness and emotional depths of living the kind chaotic life that she has. Both series (twelve episodes total) are ready to watch right now.

And if none of that takes your fancy, how about some sport? iPlayer has plenty of that too.