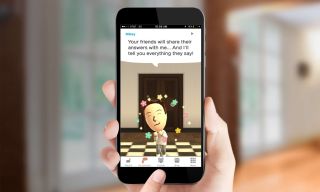 When Miitomo was first announced, I thought it was dumb. I wanted Nintendo's first mobile game to be a game, not some strange life simulator with Mii avatars. However, after spending the last 4 hours laughing uncontrollably, watching my friends' Miis breakdance and make terrifying faces, I get it. Miitomo is a wonderfully weird experiment.

Miitomo (available for free on iOS and Android) is one of those inexplicably addicting experiences in which you don't actually do much at all. You simply create or import a Mii avatar, try on silly outfits and answer random questions about your favorite foods and TV shows. However, once you start interacting with friends and rack up enough coins to dress yourself as a cat or hot dog, it's hard to stop. Here are a few reasons why I, along with about half the Tom's Guide staff, can't stop playing Miitomo.

If you've ever made a Mii avatar on a Nintendo console, you'll be right at home in Miitomo. You can individually handpick a bunch of cartoony facial features, or have the game generate one for your using your selfie cam. You can even import your existing Mii from your Nintendo Account.

Aside from your appearance, you'll also get to choose from one of several hilariously robotic voices that your character will speak in. Seriously, play this game with the sound on.

MORE: The Best Games for Wii U

Miitomo doesn't truly come to life until you've brought some friends into the mix. You can add people via Facebook, Twitter or QR codes, or use the game's face-to-face feature for when your buddies are in the same room.

Once you've got a healthy friends list, your pals will randomly show up in all parts of the game. I got a huge chuckle out of seeing my colleague Sam breakdance during a loading screen, just as I got a kick out of seeing another friend make a hilariously scary face in the middle of a conversation.

Aside from providing hilarity, your in-game friends comprise Miitomo's core gameplay hook of earning coins for answering random questions. Your friends will show up to ask you things like "what's your favorite food?" or "what do you think my favorite hobbies are?," which will help give visitors a better idea of what you're like. You can also see all of your friends' answers, and earn coins by leaving comments on them (my Miitomo crew is really into Daredevil Season 2, apparently). It's like a simplified Facebook, where everyone is either dressed as a hot dog or wearing a Mario hat.

Miifoto Is The Best. Seriously, Use It.

If there's one reason to try Miitomo, it's Miifoto, the game's ridiculously silly photo-booth feature that cracks me up everytime I use it. You can drop up to five Miis into a single photo, and have them make all kinds of goofy poses and facial expressions. You can also add text, speech bubbles and stamps, and even import photos from your camera roll to serve as a background.

Using these tools, I created the above masterpiece, which shows my Mii avatar gasping in fear at my real-life French Bulldog. Do you really need any more convincing?

It's Pretty Fun For Free (So Far)

Miitomo is free-to-play, meaning you can shell out real money in exchange for in-game currency if you're dying to buy every piece of content in the game (1,000 coins cost a buck, though you'll save some money if you buy bigger bundles). However, in my first few hours in the game, I've gotten plenty of goodies just by playing.

A good way to earn rewards is to level up your two key stats: Popularity Level and Fashion Level. The former goes up as you add more friends; while the latter increases every time you try new outfits. Just like real life, you know?

You can also try out Miitomo Drop, a mini game that lets you drop your Miis into a pachinko-like machine and earn whatever piece of clothing they might land on. It costs coins to play, but it also gives you a chance to unlock cat outfits, hot-dog-themed clothing and other silly accessories. Also, watching virtual versions of your friends get knocked around like a pinball is good fun.

Miitomo lets you earn points towards My Nintendo, the company's brand-new rewards service that spans mobile and console. Basic milestones such as adding friends and answering questions will get you points, which can go towards cosmetic Miitomo items, discounts on select Nintendo games and even full downloads of Wii U and 3DS titles. If you're a big Nintendo fan and find yourself hooked on Miitomo, you might just see some free stuff in your future.

We'll have to see how Miitomo holds up over time, but considering that our office is currently filled with the game's goofy sound effects and comically robotic voices, Nintendo seems to be onto something. If you're just as hooked as we are, let us know how you feel about Miitomo in the comments below.