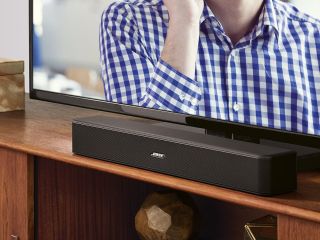 Audio manufacturers like JBL revealed their next-gen audio products at CES 2020 this week. As a result, retailers are clearing out their inventory to make room for new model soundbars. So if you're looking for a soundbar to complement that new TV you got over the holidays, the best TV deals of 2020 are up for grabs.

Not only will a soundbar make NFL games, Netflix, and Disney Plus streams come to life in surround sound, it will also eliminate cable clutter from your living room.

Here are the best soundbar deals you can get right now.

JBL 3.1 Ch. Soundbar System: was $499.99 now $299.99 @ Best Buy
This JBL soundbar system includes a 10-inch wireless subwoofer and digital amplifier to make movies come to life in surround sound. Now $200 off, it's the lowest price we've ever seen for this system. View Deal

Bose SoundTouch 300: was $699 now $399 @ Amazon
The Bose SoundTouch 300 features Bluetooth/NFC, HDMI connectivity with Dolby Digital and DTS audio support. It works with Alexa for hands-free voice control. At $399, it's at its lowest price ever. View Deal

Polk Audio Signa S2 TV Sound Bar: was $199.95 now $169 @ Amazon
This sound bar comes with a wireless subwoofer and features 5 powerful full-range drivers for rich sound with deep bass. For a limited time, it's $31 off at Amazon. View Deal

Bose Solo 5 TV Soundbar: was $249 now $199 @ Amazon
The Bose Solo 5 is Bluetooth-enabled, so it connects wirelessly to your smartphone or tablet. This makes streaming music from a device to your soundbar an effortless process.View Deal