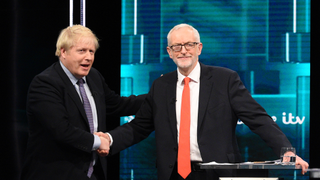 The votes have been cast in the UK general election - dubbed 'the most important election of a generation' - and will be counted and revealed through the night. We've put together a handy guide of everything you need to know to watch the 2019 general election online, and how to make sense of it all.

The previous election was only two years ago, rather than the usual five years, and the main reason is the problems the Conservative government, currently led by Prime Minister Boris Johnson, has had in getting a Brexit deal through Parliament. While the Brexit deal is undoubtedly a major part of this election, there's been plenty of discussion over a potential second referendum on leaving the EU, the state of the UK's National Health Service (NHS), the climate crisis, and in the case of Scotland's SNP, the possibility of another referendum concerning Scottish independence from Britain.

If you’ve been keeping track of the political dramas and policy announcements over the past few weeks, chances are you will want to see the results come in as it happens. Whether you’re watching as a participant in the UK, or as an interested observer over in the US, you’re spoilt for choice when it comes to live coverage. You can read more about the different places you can watch below.

After polls close, programmes continue through the night as the different constituencies announce their results, ending early on Friday morning after the vast majority of constituencies have declared, and it becomes clear where the balance of power now lies in Parliament. This is how to stream all the drama unfold and watch the general election results come in online.

If you’re taking a holiday to the US, and want to track the general election results, you can still watch the channels you already have — even though they will be geo-blocked when you’re outside of the UK. All of the above channels can be viewed while abroad, as long as you're logged in with a VPN (virtual private network).

A VPN enables you to modify the IP address of your computer (or other streaming device) so it appears to be back home in the UK, or any other country of your choice. That way you can live stream general election coverage no matter where you go.

To find the best overall VPN, we've tested a lot of services. Our pick is ExpressVPN for its mix of solid performance and outstanding customer service. Sign up for more than a month of service, and ExpressVPN can be yours for a great price.

ExpressVPN costs from $6.67 a month and will throw in three additional months for free. There's a 30-day money-back guarantee if you're not satisfied.View Deal

Where to watch the 2019 general election online in the UK

Polls times: When to watch the 2019 general election online

For voters, the polls are open today between 7am and 10pm local time, so you hopefully have plenty of time to go and cast your ballot. If you’re looking for coverage, then it begins shortly before the polling stations close at 10pm GMT (3pm Eastern, Noon Pacific), at which point the different news outlets will publish their exit polls, giving a rough indication of how the nation has voted.

Showing either on your TV or via the BBC iPlayer website or apps, you can watch the BBC’s hosts and journalist, including Nick Robinson, Andrew Neil, Andrew Marr, Laura Kuenssberg and Prof. Sir John Curtice consider the results as they arrive. It’s hosted by Huw Edwards on Thursday night and Emily Maitlis on Friday morning. It starts at 9:55pm tonight, just before the polls close, and is due to end at 1pm on Friday

You can watch both ITV news staples Robert Peston and Allegra Stratton discuss the election with ex-MPs including Ed Balls, George Osborne and Jo Johnson, brother of the Conservative Party leader and current Prime Minister Boris Johnson. ITV’s coverage, watchable on the ITV Hub site or app, begins with the main programme which starts at 9:55pm tonight and goes to 6am Friday, hosted by Tom Bradby, then after a break resumes from 9:25am to 2pm for an analysis slot hosted by Julie Etchingham.

Ex-Speaker of the House of Commons, John Bercow, is the big guest on Sky News’ election programme, hosted by Dermot Murnaghan, Kay Burley and Adam Bolton over the course of the show. Sky News will be covering the election from 9pm tonight, a full hour before the polls close, up to 5pm on Friday, making this the longest continuous coverage of the election you can get on TV in the UK. Watch it via Sky Go on your computer, Android or iOS device.

The ‘Alternative Election Night’, Channel 4’s trademark blend of straight and comedic coverage of the results, symbolised by co-hosts Rylan Clark-Neal and Krishnan Guru-Murthy, begins at 9:55pm tonight, and ends at 6am on Friday. Other hosts include ex-MPs Amber Rudd and Tom Watson plus Clare Balding and Rob Rinder. You’ll find the programme on the All4 app, or on Channel 4’s website.

Where to watch the 2019 general election online in the US

Americans have so much political news these days, what with President Donald J. Trump's impeachment hearings taking place, that it might be hard to watch the UK general election online by relying on the traditional American news media.

So, we recommend you tune to BBC World News, which will have much better reporting. It's available in both Sling and YouTube TV, but while it's cheaper at Sling ($20 per month with Orange + News Extra), new members can use the 2-week free trial at YouTube TV to sample the service for the election before paying its $50 per month fee.

Sling TV (Orange): This best-selling streaming service includes ESPN in its Orange package of channels. It starts at $15 for the first month and costs $25 per month after that.View Deal