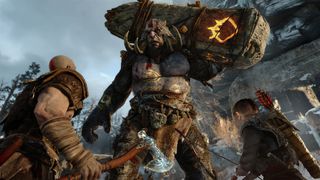 If you own a PS4 and don't own God of War, you need to fix that. Especially while Sony Santa Monica's beloved action epic is just $10 on Amazon right now ahead of Black Friday.

For the price of a burger and fries at most fast food joints, you can get one of the best PS4 games ever made, if not the best. God of War brilliantly reboots Sony's long-running action franchise, delivering deep, deliberate combat, a gorgeous Norse-inspired world filled with secrets, and a truly compelling version of protagonist Kratos who must balance his rage with his new responsibility as a father.

Sony's breathtaking God of War reboot is one of the best PlayStation games ever made, and can be had for next to nothing right now.View Deal

While God of War for $10 is a no brainer, we're also seeing tons of other great PS4 Black Friday deals that have popped up early. Walmart has a PS4 Pro Call of Duty: Modern Warfare bundle for just $299, while Sony is selling a limited edition PS4 Pro Death Stranding package for $299. Plenty of other must-have PS4 games are on sale too, including the stellar Spider-Man: Game of the Year Edition for just $14.99.

Black Friday is technically still days away, but many of the best Black Friday deals have already surfaced early. Be sure to bookmark Tom's Guide for the best savings and check back next week for the best Cyber Monday deals.