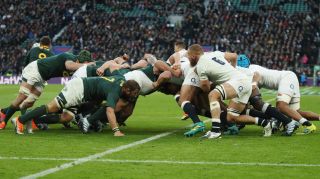 It's on! England and South Africa are going head-to-head in the Rugby World Cup final right now to see who will be crowned the best nation in the world. As a final that only takes place once every four years, to call this exciting would be a huge understatement! And you can get an England vs South Africa live stream from just about anywhere on Earth.

While England won the title once before in 2003, South Africa has taken the win twice, once in 1995 and the other time in 2007 when the Springboks beat England in the final.

England beat both Australia and Australia to secure its place in the final. As the only northern hemisphere side to win the World Cup, a win here will give England the chance to match South Africa as a side that's won the Web Ellis Cup twice.

The Springboks narrowly defeated the Welsh 19-16 in a kicking contest, which some would argue is a style of game that England isn't currently built for. South Africa coach Rassie Erasmus talking about England, said: "They're obviously much better than the last time we played them. You could see that the way they dismantled New Zealand. We've played England four times in the last 18 months, it's 2-2... we're accustomed to the way they play."

Streaming options vary greatly, based on where you are, and cost a lot in the U.S.. Here's our guide to watching the 2019 Rugby World Cup online from absolutely anywhere, and getting an England vs South Africa live stream on Saturday.

Anyone, anywhere, can watch the Rugby World Cup, on the service they're already using at home - that's essential if you're hoping to watch this in a country that isn't showing the RWC in Japan. A virtual private network (aka VPN) is the tool you'll use to dodge any geo-restrictions that may try and block your way.

Once you've got a VPN, and we've got our picks on the best ones, you can make it seem as if your computer is back home, or anywhere else. This way you can use the legal service that you're used to, and stop cycling through illegal streams from Periscope, Reddit and wherever else you're pulling them from.

Our favorite VPN service, ExpressVPN, really shines thanks to its safety, speed and simplicity-to-use. It's also compatible with loads of devices - from iOS and Android to Roku, Apple TV and PlayStations. You'll even get an extra 3 months free if you sign up for a year, or there's a 30-day money-back guarantee if you just want to give it a try.View Deal

WHEN IS England vs South Africa in the RUGBY WORLD CUP?

How to live stream England vs South Africa in the Rugby World Cup 2019 in the U.S.

The Rugby World Cup final, thankfully, streams on NBC Sports, so you can watch England vs South Africa without any extra purchases beyond your cable package. Instead, you have to pay more for the NBC Sports Gold streaming service. NBC Sports Gold pricing starts at $34.99 for live (and on-demand) streams for single matches.

True rugby obsessives probably already have the $229 All-Access Premium Rugby Pass. That extra $30 gets you season-long access to the 2019-20 Rugby Pass (with a metric ton of other matches, including the Six Nations Championship, EPCR, Premiership Rugby League).

How to live stream England vs South Africa in the Rugby World Cup 2019 in the U.K.

Like every Rugby World Cup game, England vs South Africa is free for those in the U.K. It's on the main ITV channel today. Yeah, if you can believe it, folks in the U.K. won't pay a dime to live stream the Rugby World Cup. That's because it's an ITV exclusive over there, and that service has no price attached.

No complexity here. The English face the Springboks on Canada's TSN, as it's the exclusive streaming service of the Rugby World Cup 2019 for that region. This means Canadians need to access their TV, a web browser or the TSN app on iOS or Google Play.

Since this is the final Channel 10 will air the action for free, live on TV.

Of course Aussies will also get the game aired on Fox Sports as part of a subscription package. That means you'll need a valid Foxtel TV subscription. But there are other options.

Alternatively, you can watch the Rugby World Cup from Kayo Sports, which also offers cricket, football and the NBA. It costs $25 per month for two simultaneous streams, and its Kayo Sports Premium Package is $35 per month for 3 streams.

England vs South Africa will stream live on TVNZ as it offers the final included for viewers to enjoy.

Spark Sport, however, is live streaming all of the matches as it owns the rights to the tournament. So if you want to watch via a digital device using this service, you'll need to buy their Rugby World Cup Pass — and that you'll need a 15MBps connection to view high-def content.

How did England and South Africa get to the finals?

England is working its way through the entire southern hemisphere to claim victory having beaten Australia, New Zealand and now is up against South Africa.

South Africa defeated Wales in its last game for a place in the final. Before that it put host nation Japan out of the cup in the quarter-finals.