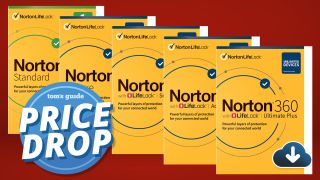 Beginning Wednesday, Nov. 27 and continuing through Monday, Dec. 2, NortonLifelock is offering up to 65% off its antivirus, identity-protection and VPN products.

Norton 360 is consistently among our best antivirus products. The same goes for LifeLock among our best identity-protection services. Combining the two and tossing in one of the best VPN services makes NortonLifeLock's bundles nearly irresistible.

The company also offers three bundles of Norton antivirus software and LifeLock identity protection. The most basic one, Norton 360 with LifeLock Select, drops from $150 yearly to just $84.99 for the first year: a reduction of 43%.

All five of these products come with unlimited usage of Norton's Secure VPN service, but you can also buy that service on its own.

Norton 360 w/LifeLock Advantage: Was $250, now $175
The next step down cuts the online storage in half to 250GB, limits the VPN service to 10 devices and monitors your credit only with Equifax. The top-notch antivirus protection stays the same, although it's limited to 10 devices.View Deal

Norton 360 with LifeLock Select: Was $150, now $85 @Norton
The lowest antivirus/identity protection bundle gives you 100GB of online storage, Equifax credit monitoring, and five-device licenses for both the antivirus software and the VPN service.View Deal

Norton 360 Standard: Was $80 now $30 @Norton
One of Norton's entry-level products, this comes with 10GB of online storage and a single-device license for Norton's unlimited Secure VPN service. Except for the parental controls, it has all the protection features of Norton 360 Deluxe.View Deal

Norton Secure VPN, 5 devices: Was $80 now $29.99 @Norton
Norton's VPN service, provided by its subsidiary SurfEasy, was already one of the best bargains among consumer VPN services. This $30 deal for five devices is a no-brainer.View Deal