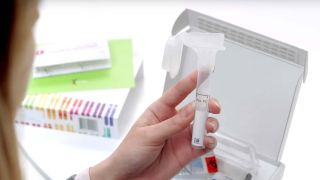 Buying a DNA test kit is one of the weightier consumer-tech decisions you can make. When you mail that tube of your own spit (in most cases) to a genetic-testing service to get a breakdown of the traits encoded in your genes, you may get back more information than you wanted about your ancestry or your health.

The data points that this test will surface by sequencing your DNA may also complicate your employment and health-insurance picture in the U.S. Here, privacy regulations governing direct-to-consumer DNA testing services remain patchy. And there's no "undo" button for any of these risks.

So we placed a high priority on privacy when selecting the best DNA test kits — in how they explain their policies to you, what lines they draw around sharing your data and the options they give to you to erase your data. We especially valued services that documented, in regularly updated transparency reports, how they responded to government queries.

For potential DNA-test customers interested in researching their heritage, the other key factor to consider is size. As in, the more customers a company can put into a reference database, the higher the odds that it can find your relatives, both known and unknown.

Services that examine not only autosomal testing (which can identify ancestors up to five generations back), but also mitochondrial DNA (which can trace maternal lines much farther into the past) and Y-chromosome DNA (which offers additional patrilineal insights to men) also deserve more consideration.

We researched the major services, including studying the top picks of CNet, PCMag, PCWorld and Wirecutter. Two services consistently led all of those assessments while also offering strong privacy options and a large sample size, so we tested each directly.

Here are the best DNA test kits for your money.

Perhaps the most high-profile DNA service, Sunnyvale, California-based 23andMe also offers the most complete set of tests, making it the best DNA test kit overall. Its basic, $99 service analyzes what your genetics say about your genealogy — factoring in autosomal, mitochondrial and Y-chromosome DNA testing to provide the fullest possible picture. The $199, full-service option adds tests for personal traits and health risks.

Even if you pay for only the entry-level option, 23andMe runs the full suite of tests, so it can provide those results as soon as you decide to upgrade. So if you do not want to create facts about any genetic predispositions for conditions such as Parkinson's disease or colorectal cancer, you should avoid 23andMe.

Otherwise, the service provides an elegant, easily browsed guide to what your DNA says about you, in the sense of both your past and future. It provides clear explanations of what each result can mean. And the frequent updates to 23andMe's analytical model and database mean your results can get more accurate over time.

23andMe also checks off all the important privacy and security boxes: It lets you easily control where anonymized snippets of your data can go, provides options to delete your original DNA sample and the results calculated from it, and supports strong two-step verification via authenticator apps. The company also posts a regularly updated transparency report inventorying how often governments have asked for data about 23andMe's customers and how often the company has complied.

That last number remains zero, something other DNA test services can't claim. The company's willingness to resist government curiosity deserves a little credit now that a Florida judge has granted a search warrant allowing police inspection of the million-plus DNA profiles uploaded to the GEDmatch site.

A top choice for genealogy research

The single most popular DNA-test service, Lehi, Utah-based Ancestry also offers the best DNA test kit for genealogy research. Credit for that goes not only to the 15 million-plus people in the company's database, but also to Ancestry's extensive and frequently upgraded database of documentation. Other services can't touch the resulting combination of medical and historical data, although cultivating your family tree with Ancestry's records comes at a higher monthly cost. And because Ancestry does only autosomal testing, the company can't peer as far into your maternal or paternal heritage as 23andMe can.

This service doesn't look nearly as strong in its presentation of your genetics-based personal traits, such as cilantro aversion or a unibrow. You can't just browse a list of these results; instead, you have to click through each, one page at a time, as if Ancestry were trying to run up its page views.

In mid-October, the company announced a new health-screening service that will provide some of the same insights as 23andMe does about predispositions for disease. But that AncestryHealth service, a $149 add-on, comes via a network of clinicians, which will make it unavailable to some customers for regulatory reasons. (Ancestry warns up front that New York, New Jersey and Rhode Island residents need not apply.) It will, however, provide other customers with a more direct path to informed advice about the findings.

Ancestry also offers fewer purchase options than 23andMe does. You buy a kit either at the 23andMe site or at Amazon. And though the company charges shipping fees while Amazon does not, going with the cheaper route puts one of your more personal purchases directly into Amazon's marketing database, one of the world'’s biggest.

Ancestry can also leave you unnecessarily exposed if you use a shared computer. Even if you enable two-step verification (offered only via text messaging), the site keeps you logged in across browser restarts.

A good Ancestry alternative for a cheaper price

MyHeritage is the best DNA test kit alternative to its Lehi neighbor, Ancestry. Like its larger competitor, MyHeritage does only autosomal testing, allows you to add historical records to your family tree at an added cost and recently added health testing.

MyHeritage offers lower, sometimes substantially lower, upfront costs. But you will have to pay postage to send in your sample, collected via a swab of your cheek, to the company.

But MyHeritage has far fewer people in its database, 3.5 million test kits' worth, PR Director Rafi Mendelsohn told Tom's Guide. That lowers the odds that you'll find missing relatives with this service. You can, however, put more leaves on your family tree by browsing MyHeritage's database of historical records, at an added annual cost of $189.

In May, the firm added health testing. That's done through the same network of doctors as Ancestry uses, so there's also no instant upgrade with this service: You have to complete a questionnaire and then wait a few days, although you don't have to send in a new sample. And just as at MyHeritage's larger competitor, this option is legally off-limits to residents of New York, New Jersey and Rhode Island

MyHeritage allows you to make your profile private and offers two-step verification via either text messages or an authenticator app. The company does not, however, publish a transparency report. But Mendelsohn wrote that MyHeritage has never "sold, licensed or shared" any of its user data, adding that this declaration "includes [sharing with] police or government authorities."

A service that doesn't farm out testing

This frequently recommended choice is one of a minority of DNA test kit services to do all its analysis of customer DNA (collected via a cheek swab) in house instead of contracting with outside labs. That would make Houston-based FamilyTreeDNA good for privacy — except for what it did without telling its users in early 2018.

That's when the company quietly allowed law enforcement investigators to upload samples from suspects to search for matches among FamilyTreeDNA's customer data. Company founder Bennett Greenspan defended that policy in a blog post, arguing that police researchers would not be able to see any more than what any other customer could. But the problem came in failing to tell people about this up front.

FamilyTreeDNA has since resumed its prior practice of posting a transparency report, a welcome move to hold itself accountable before customers.

This company also sets itself back, however, with an unnecessary reliance on jargon like "HVR2" versus "HVR1." (Those abbreviations refer to two segments of your mitochondrial DNA subject to faster mutation over time.) Even its homepage assumes a sufficient acquaintance with genetics terminology that you'd value the option to "Compare matching segments of DNA (blocks) with your genetic matches."

Because FamilyTreeDNA charges separately for its autosomal, mitochondrial and Y-chromosome DNA tests, you can wind up paying far more than at competing services. A man who opted for all three tests, at their currently discounted rates, would spend $297; a woman would max out at $198, because the Y-chromosome-requiring Y-DNA test would be inapplicable. Most users have opted for the autosomal test — 1.5 million to date, according to the company.

FamilyTreeDNA does not offer two-step verification, and the site tolerated an all-lowercase-letters password, leaving users vulnerable to “credential-stuffing” attacks that try frequently-reused passwords. Overall, this DNA test kit would be better if the company offered more guidance.

This Somerset, U.K., firm deserves credit for offering a free, upfront tutorial via email instead of expecting customers to grasp concepts like haplogroups (defined genetic populations that go back tens of thousands of years). And like 23andMe, this service provides autosomal, mitochondrial and Y-chromosome DNA testing for one price. Other companies sell only one of those services or ask people to pay up for a complete set of tests that will give the deepest perspective on ancestry.

And Living DNA's Starter edition, which gives you a breakdown of your ancestral DNA among eight regions around the world plus data points on your likelihood of vitamin D deficiency and the best kind of exercise for your muscles, provides a low-price taste of DNA testing. Paying another $49 will upgrade you to LivingDNA’s ancestry-tracing version.

That will add an extended history along your maternal side, plus your paternal side if you're a man. But Living DNA's small sample size, just 29,000, reduces the odds that you'll find any distant relatives. Many of those samples come from the U.K., so this company's regional-ancestry estimates are most granular inside the British Isles.

Living DNA's well-being test adds results about how your genetics can affect your diet, exercise and other personal traits, plus advice about how to optimize your eating and exercising. But it does not cover genetic predispositions for disease.

The site accepts weak passwords, like "password,"and does not offer two-step verification to secure accounts. But the company says it's now adding that extra line of defense. Living DNA does not publish a transparency report, either, although the company touts its compliance worldwide with the European Union's strict privacy regulations.