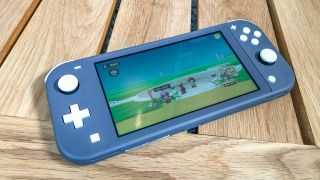 Black Friday deals aren't expected to begin for another few days, but we've just spotted what could be the best smartphone bundle of 2019.

Purchase a new smartphone on contract at Mobiles.co.uk and you'll get a free Nintendo Switch Lite with your purchase. (It's the second slide on the homepage carousel). Even better, use coupon "10OFF" during checkout to take an extra £10 off the already low upfront costs. With phone prices starting as low as £23, it's a no brainer for anyone in search of an early Black Friday phone deal. (No word on whether this sale could return on Cyber Monday).

The phones on sale are mostly mid-tier phones and include the Samsung Galaxy A40, Samsung Galaxy A20e, Nokia 6.2, Nokia 7.2, Huawei P30 Lite, Oppo A9 2020, and Samsung Galaxy A10. However, you'll be able to do all of your mobile gaming straight from your new Nintendo Switch Lite handheld.

The Editor's Choice Nintendo Switch Lite is the perfect portable console. It's smaller than the classic Switch, but we found that its 720p 5.5-inch touchscreen is actually more immersive than the Switch's 6.2-inch screen. That's due to the fact that the Nintendo Switch Lite has thinner bezels and a uniform chassis that doesn't distract from the screen. (Meanwhile, the classic Switch is a bit of a Frankenstein's monster with multi-colored Joy-Cons snapped onto  the 6.2-inch screen).

There's no telling when the Nintendo Switch Lite promo will end, so we suggest snatching these Black Friday phone deals now while they're still available.