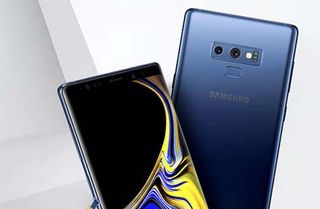 The Galaxy Note 9 leaks keep on coming as we get closer to the new phone's August 9 unveiling. And this latest leak — reportedly an official render of the new phone — gives us our best look yet at what Samsung has planned for the Note 9.

The leaked image comes from Evan Blass, who posted it to his Twitter account. It shows us what looks like the Note 9 from every angle — the front of the phone, plus its back panel and a banana yellow S Pen propped up against the device.

There's a strong chance this is the genuine article. For one, Blass has a strong track record of accurate leaks when it comes to Android devices. For another, what we're seeing in this photo is consistent both with rumors about the Note 9 and with previous leaked renders from reputable sources.

Take the front of the phone, which sports the same Infinity Display as the current Note 8. It's expected that Samsung's new phone would retain the look of last year's model, though the edge-to-edge display might be slightly larger at 6.4 inches. Samsung's reportedly shrinking the bezels slightly as it did with the Galaxy S9, which will let it squeeze in a little more screen real estate without increasing the size of the phone.

The real story is with the back of the phone. Like the Note 8, the Note 9 will have two rear cameras, but the fingerprint sensor now sits below the lenses. That's a change from the Note 8, where the sensor as just off to the right of the cameras. Samsung made the same switch with the Galaxy S9 earlier this year, so it stands to reason that it would make a similar move with its phablet.

The S Pen gets a bright yellow look, although Samsung already hinted at that in its invitations to the August 9 press event. (We've seen alleged leaks of the S Pen's new look, too.) There's a button visible on the S Pen that's thought to be related to the Bluetooth connectivity Samsung is reportedly adding to the stylus. The feature will apparently let you use the S Pen as a remote control for the Note 9.

We won't have to wait long to see if these renders are, in fact, the Note 9. Samsung's August 9 event is less than a month away, and a new rumor suggests the Note 9 could reach retail shelves as soon as August 24.