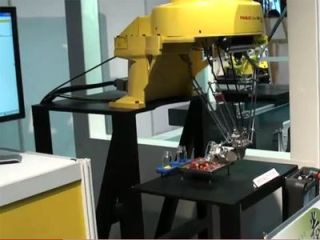 Most people enjoy the fact that every bag of Skittles is an explosion of colored sugar. Some, particularly the obsessive-compulsive variety, hate this fact, and would rather sort things out so they can get to enjoy their favorite colors. We're guessing the inventor of the FANUC M-1iA is the latter.

This high-speed color-sorting robot spends its entire time emptying bottles of different colored Skittles onto a plate. Once everything is mixed up, it then rapidly segregates the rainbow-colored candies into separate containers, only to repeat the process ad nauseam.

The FANUC's ability to rapidly pick things apart by eye makes it, at the very least, a useful device for sorting things like pills or Halloween spoils. That's two jobs it can easily take away from humans, the latter one being your kids' job. That's... quite an evil way to start out the robot revolution.