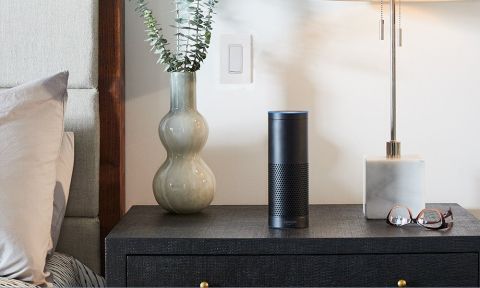 By adding a smart-home hub into the Alexa-enabled Echo Plus, Amazon is trying to make the smart home more accessible to the masses.

Ever since the first Echo, Amazon has been trying to make itself the center of your smart home. However, with most smart-home devices, there's always been an intermediary -- a smart-home hub -- between your lights, locks and switches, and Alexa. With the $149 Echo Plus, Amazon has built the hub into its smart speaker, in an attempt to eliminate that pain point. But while it's off to a good start, Amazon needs to do a lot more before the Echo Plus is a true smart-home hub.

What the Heck Is a Smart Hub, Anyway?

One of the barriers for those who want to set up a smart home is that many smart devices — such as lights, locks, and window and door sensors — need to first connect to a smart-home hub. That's because these devices have batteries that would drain too quickly if they were to use Wi-Fi to connect to your network. Instead, they use a technology called Z-Wave or Zigbee, which uses very little power, so you'll only have to change their batteries once every few years.

However, in order for you to be able to control them from your smartphone, they first have to connect to a hub, which passes their signal to your Wi-Fi network. You can see this with such devices as the Philips Hue and Sengled Element starter kits; in addition to the bulbs, they also come with small "bridges" that plug into your router.

Amazon's Echo Plus has that bridge built in (it uses Zigbee), so if you wanted to get a bunch of smart lights, you can do that, and not need to also get a hub.

Design: Same As It Ever Was

While Amazon's second-gen Echo sports a new, fabric-y look, the company stuck with the design of the original Echo for the Echo Plus. The Plus stands 9.3 inches tall, and has a diameter of 3.3 inches. The all-new Echo is about 3 inches shorter, but slightly wider.

As with the original Echo, the Plus is a plastic cylinder with perforations around the bottom half. On the top are two buttons, one to summon Alexa and one to turn off its mic, and the top edge rotates to adjust the volume.

The design is functional, but I wish it had the fabric-covered exterior of the new Echo. Plus, the Plus only comes in a dark metallic silver, whereas you can swap the shells on the new Echo.

Adding smart-home devices to Alexa is pretty easy, but Amazon's smart-home skills lack the complexity you'll find in even the most basic of third-party hubs.

To get started, you first have to plug in and power on whatever it is you want Alexa to connect to. Next, I went to the Smart Home section of the Alexa app, and pressed the button to discover new devices. After about a minute of searching, the app said it discovered a device, whose outline showed up in blue.

The Echo Plus can connect with a wide range of bulbs, including those from Philips, Cree, GE, Ikea, Sylvania and Osram. If all you're planning to do with them is have them turn on and off, then I suggest getting the least expensive ones. Sengled’s are just $9 each; a pack of eight costs $70.

Clicking on the icon opened a new screen showing its status, and allowed me to turn it on or off, and dim it. Pressing the Edit button in the upper right corner let me change its name.

The range of the Echo Plus is somewhat limited, depending on your house. For instance, I set up the Plus on my first floor, in roughly the same location as the Philips Hue Bridge. I then plugged in a Philips Hue bulb into a lamp in my attic. Next, I tried connecting the bulb using the Alexa app, but it couldn't find the bulb. Neither could the Philips Hue app at first, but it also gives you the option of entering the bulb's serial number; after doing this, the Philips app was able to discover the bulb. (In the Alexa app, this is buried in a help menu).

However, if you connect a bulb directly to Alexa, you can't then control it using the Philips app; you first need to unpair it from Alexa, and then pair it to the Philips' hub. Pairing directly with Alexa means if you have colored lights, you can't use the multitude of scenes available from within the Philips Hue app.

However, you can tell Alexa to change the lights to a particular color, of which there are literally thousands.

When creating a group, you have to choose which smart devices are in that room. You can also specify which Echo device you want to control them. In that way, if the Plus is in the living room, you merely have to say "turn on my lights" while you’re in the living room.

New to Alexa is the ability to create Routines, a set of actions that will trigger at a certain time of day, or when you say a particular phrase to Alexa. These can include reading the news report, traffic or weather, as well as activating a smart-home scene or device. So, you could say "Alexa, good morning," and it will turn on your lights, tell you the latest headlines and start your coffee maker.

If you've created a scene and imported it into the Alexa app from another smart-home device — such as a lighting setup from Philips Hue, or a command from the Logitech Harmony remote — you can incorporate them into a routine.

While a good start, this is pretty rudimentary as far as smart-home skills go. For example, with Lutron's lights, you can schedule them to turn on at a set time before sunset. Others, such as Samsung SmartThings or Philips Hue, will turn on lights if a motion or door sensor is tripped. You can't set up either of these scenarios within the Alexa app. And, you can't integrate Routines with IFTTT yet.

So, while I'm sure that Amazon will add features as time goes on, at the moment, the Echo Plus isn't the most capable smart-home hub.

As a speaker, the Echo Plus was on a par with the original Echo, as well as the second-generation Echo. Bass was boom-y, with crisp, bright treble, and when turned up, the Plus could really crank out tunes. For many people, it will work well as a primary music source.

The Plus accentuates both the high and low ends of music, so Mariah Carey's voice really rang out, as did the driving bass line in "All I Want for Christmas."

I felt that the higher ends were a bit too bright, so some singers, such as Elvis Presley in "Jailhouse Rock," sounded a bit tinny. The same thing happened when I was listening to Kenny Rogers' "The Gambler"; some of his vocals sounded downright scratchy. If the Plus had a bit stronger midrange, it would help balance out the sound overall.

Overall, the Echo Plus delivered a good music listening experience for the price. However, if you're not satisfied with the Plus' audio you can pair it with other Bluetooth speakers.

Adding a smart-home hub into a device that's already sitting in the middle of your house was a logical move for Amazon. It gets rid of the extra step of a consumer having to set up a second gadget just so they can control a third. Not only is this a time-saver, but it also helps eliminate a point of confusion, too. In order for the Echo Plus to appeal to power users as well as newbies, Amazon needs to beef up what you can do once you've connected all those smart-home devices in the Alexa app. But the Echo Plus is off to a good start.