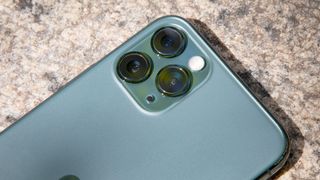 The camera bump on the back of the iPhone 11 and iPhone 11 Pro might not be the prettiest part of the phone, but it’s got a good reason for being there. These phones have sophisticated camera features, and the sensors, lenses and other camera hardware need the room.

However, a new patent shows that Apple is trying to shrink the bump, and improve the quality of the wide or zoom images it produces at the same time.

Two patents, newly granted by the USPTO and spotted by Apple Insider (via TechRadar), detail Apple’s ideas to fit five-lens and three-lens arrays into a smaller space by using a prism to reflect light 90 degrees between the first lens and subsequent lenses and eventually the sensor that records the image.

If you’re knowledgeable about smartphone camera hardware, then you may have already recognized that this is the same system that Huawei uses in its Huawei 30 Pro to achieve 5x optical zoom with only a minimal camera bump. The P30 Pro’s skill in the telephoto department has continued to impress us since the phone debuted in March 2019, and if Apple was able to implement something similar and sell it to its dedicated user base, then this technology would finally get the wide recognition it deserves as a clever piece of engineering.

Of course, these are just patents. Patents show a company’s intentions for the future, but one cannot guarantee if or when these ideas will become reality. But considering that optical zoom lenses are a common feature on high-end smartphones this year -- including a 2x one on the iPhone 11 Pro and iPhone 11 Pro Max -- it’s not a stretch to believe that Apple wants to improve its technology to remain competitive.

There have been several interesting Apple patents in the news of late. These include an electrostatic haptic keyboard for touchscreen devices, as well as some concepts of how an eventual foldable iPhone would look.

If you want to read more about next year’s Apple phone and what we may know already, then check out our iPhone 12 rumors hub page.