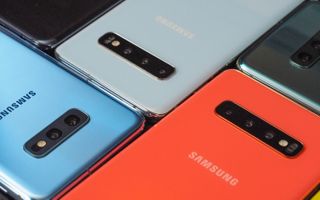 Editors' Note: Following price cuts at Walmart, Amazon has increased the Prime Day discount on the Galaxy S10 lineup, knocking $300 off the price of the Galaxy S10 and S10+. Read our updated look at the Galaxy S10 deals.

Samsung's Galaxy Note 10 launch may be less than a month away, but you can find some attractive savings on Samsung's other flagship phone releases this year. As part of its Prime Day sale, Amazon is knocking anywhere from $200 to $300 off the latest Galaxy S10 phones, with discounts available on all models.

Samsung Galaxy S10e: Was $749 now $549 @ Amazon
Samsung's low-cost version of the Galaxy S10e is even cheaper with this $200 discount on the base model. If you can, see if Amazon is offering a discount on the 256GB model of the S10e.View Deal

The biggest savings can be found on both the cheapest S10 models. The Galaxy S10e, which has the lowest price of any S10 phone, gets a $300 discount on its 256GB model bringing the cost down from $849 to $549. (Update: This offer appears to have expired, though Amazon is still cutting the price on the base model S10e.) Because the entry-level S10e only gets a $200 discount off its $749 price, you'd get double the storage for the same price with the 256GB model.

Samsung Galaxy S10+: Was $999 now $799 @ Amazon
You'll get a bigger screen and more cameras on the most expensive of Samsung's Galaxy S10 models. This 128GB version gets a $200 discount, but you can save $300 on higher-capacity models.View Deal

These are solid savings on some of the best smartphones, to be sure, but you might want to check out rival retailers to see if they can match or beat Amazon's Prime Day pricing on the Galaxy S10. Best Buy, for example, is also selling an unlocked 128GB Galaxy S10 for $699, but if you activate instantly with AT&T, Sprint or Verizon, it will cut the cost by another $200 to $499. The S10e and S10+ are subject to similar $400 discounts with instant activation.

Texts:
Nationwide & International Text to over 200 countries in the world
View
at
Verizon Wireless
We check over 130 million products every day for the best prices
View All Deals
powered by

in association with
WhistleOut
No comments yet Comment from the forums