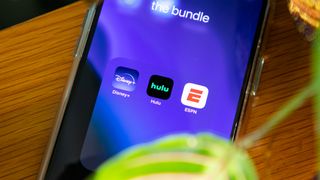 The big Disney Plus, Hulu and ESPN Plus bundle — which chops $5 (72% of Disney Plus' price) from the total price — is a pretty interesting deal. What's weird is that Disney isn't advertising the ways to save by subscribing to Disney Plus with ad-free Hulu, or Hulu with Live TV.

I've never liked that Hulu makes you pay more for its ad-free version (which still has ads on some content), but I still would do that — because I just don't want ads. I pay for ad-free YouTube, and I'd do the same for any service I truly value.

• Want to try the Disney Plus-Hulu bundle? Sign up for the Disney+ bundle 7-day free trial

Thankfully, Disney is offering a discount for existing ad-free Hulu subscribers, as reported by Lifehacker. If you sign up for Disney Plus with the same address you're using for Hulu and ESPN Plus, Disney will offer a $5.99 per month (yes, a dollar more) credit for as long as you're subscribed to all.

You can also see this as Disney essentially erasing the premium you pay to get ad-free Hulu, as ad-free Hulu is $11.99 and regular Hulu is $5.99 with ads.

Then there's the matter of live TV, the one thing that every prospective cord-cutter doesn't want to live behind. You can't simply choose a version of the Disney Plus, ESPN and Hulu bundle that offers Hulu with Live TV. Fortunately, Decider reports that existing Hulu with Live TV subscribers can get that same $5.99 discount, as long as they're using the same email address for their signup.

Check out my Disney Plus review to see why I'd subscribe to it, with or without a bundle.

The Disney Plus, Hulu and ESPN+ bundle is getting a lot of attention, as it might give some viewers enough to cut the cable, for the same price as Netflix's standard package. But unlike Netflix, Disney Plus throws in 4K Ultra-HD video with 4 simultaneous streams, which costs $15.99 on Netflix.View Deal