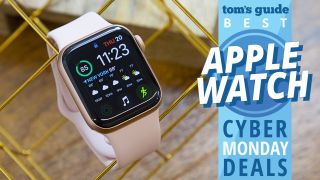 Apple is offering Apple Store Gift Cards up to $200 through Cyber Monday, as usual, but you'll want to turn to Amazon, Best Buy and Walmart for serious sales.

Here's all the early Cyber Monday Apple Watch deals so far, and stay tuned for even steeper price drops throughout Cyber Monday week.

Apple Watch Series 4 (GPS/40mm): was $349 now $309 @ Best Buy
You can save on this GPS version on the Apple Watch Series 4 at Best Buy for Cyber Monday. This smaller 40mm version of Apple's smartwatch offers continuous heart rate monitoring and is available in a white, black, or pink sport band. Best Buy is also throwing in four months of free Apple Music for new subscribers.View Deal

Apple Watch Series 4 (GPS/44mm): was $379 now $339 @ Best Buy
The Apple Watch Series 4 is one of the best smartwatches you can get. It's swim-proof and offers advanced health-tracking features. For a limited time, you can snag the 44mm model for a discount at Best Buy.View Deal

Apple Watch Series 4 (GPS/LTE/40mm): was $449 now $349 @ Best Buy
For just $40 more than the GPS-only model of the 40mm Series 4, you can snag the cellular model for a total savings of $100 on Cyber Monday. That's an incredible deal, especially for people who want to use their watch as a stand-alone device (for instance, streaming music while running outside). View Deal

Apple Watch Series 5 (GPS/44mm): was $429, now $384 @ Amazon
Save big on the 44mm Apple Watch Series 5 with GPS by adding the watch to your Amazon cart to see an extra $24.01 shaved off the final price. The larger Series 5 has an even bigger always-on display than the 40mm model, and a slew of sophisticated health features (including the ability to take an electrocardiogram on your wrist).View Deal