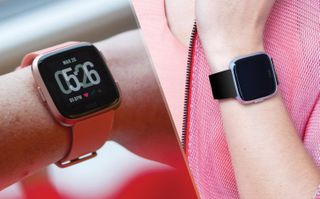 Fitbit’s Versa Lite smartwatch looks almost identical to last year’s original Versa, but with a lower price tag. The $159.95 Versa Lite is $40 cheaper than the original Versa, and comes in a couple of new shades (a vibrant Marina Blue and a Mulberry plum).

Update August 28: Fitbit is releasing the Fitbit Versa 2 ($199), an updated version of the original Versa, which features a brighter AMOLED display, has Alexa built-in, as well as several other features. Stay tuned for an update to this story.

But beyond cosmetic changes, the biggest differences are under the hood.

Fitbit streamlined the design of Versa Lite, removing two buttons from the original Versa to simplify the newer model’s navigation.

The company also stripped away the ability to track floors climbed and lap-tracking during swim workouts. The biggest sacrifice, on-board music storage and guided workouts on-display, stings a little more.

WIth these changes, Fitbit made the Versa Lite a lot more basic than its predecessor. That’s not necessarily a bad thing — just something to note if those features are important to you.

Versa Lite: Who’s it for?

Fitbit says the Versa Lite is designed for “people who have been left out of the smartwatch market,” said Melanie Chase, Fitbit’s vice president of product marketing, during a press event announcing the new device. The Versa Lite, Inspire and Inspire HR are part of Fitbit’s goal to make the company’s lineup “accessible to everyone.”

If you don’t swim and don’t care about listening to music without your phone nearby, then the missing features won’t be a big deal.

Fitbit’s Versa Lite is one of the cheapest smartwatches you can buy, but there are trade-offs. Samsung’s $200 Galaxy Watch Active, out now, offers built-in GPS, on-board music storage with Spotify integration, a beautiful, colorful touchscreen and a traditional round display for just $50 more. The watch works with both iOS and Android, just like Fitbits do, though it works best with Samsung’s Galaxy devices. (Samsung also says its watch can help track blood pressure with an app due later in March, though it’s unclear how accurate that feature will be.)

Fitbit is making its smartwatch more compelling with a lower price, but the pricier original is a better smartwatch. If you don't care about features like on-board music storage or swim-tracking, the Versa Lite is worth a look.