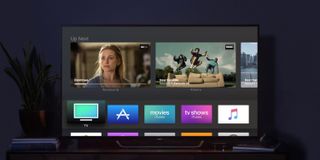 The retailer is bundling the rarely discounted Apple TV with the SteelSeries Nimbus Controller for $149.99. That's $50 cheaper than buying each separately.

The full-sized controller turns your Apple TV into a mini console by making it easier to play games comfortably on your Apple TV.

The Xbox One-like controller features a D-pad, dual analog sticks, A/B/X/Y action buttons, and two sets of left/right buttons on the back side. There's also a menu button that lets you navigate your Apple TV.

The controller features a Lightning port for recharging and is rated at 40 hours of play.

As for the Apple TV, its slick interface and Siri integration make it one of the best streaming players on the market if you're invested in the Apple ecosystem. Its abundant library of games also make it a great console substitute for casual players looking for a cheap way to get their game on.