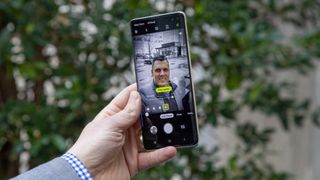 Next year's Galaxy S11 could be taking more than one page out of the Pixel 4's book. At the same time a report surfaced that Samsung's next flagship could add a motion detection feature similar to the one on Google's last phone, another report suggests that the Galaxy S11 could feature more sophisticated face-unlocking features, too.

That comes from a tweet posted by Max Weinbach, a writer for XDA Developers, who spotted code for the S11's user interface. That code suggests "Samsung is actively working on facial recognition," Weinbach says.

Another (exclusive) S11 leak(?). In the Face Service app, Samsung has started to work on the UX_Picasso. Essentially, the UX for the S11. In reality, it doesn't say much about anything besides Samsung is actively working on facial recognition. pic.twitter.com/FNFrK158iuOctober 28, 2019

Samsung's phones already have facial scanning, but it's not as sophisticated as what you'll find on the Pixel 4 or with the Face ID feature on Apple's iPhones. The current facial scanning feature on the Galaxy S10 lets you unlock your phone, but because Samsung's method doesn't use hardware to create a 3D map of your face, you can't use the feature to verify mobile payments like you can with Face ID. Also, the Galaxy S10's face scanning is notoriously easy to fool, so it's understandable why Samsung may want to beef things up for its next phone.

It's uncertain what more sophisticated face unlocking would mean for the in-display ultrasonic fingerprint sensor Samsung added to the Galaxy S10 and S10 Plus. That feature certainly works well enough, though it's not as seamless as capacitive sensors have proven to be over the years. And earlier this month, we learned of a flaw where the fingerprint reader on both the S10 and Note 10 could be fooled by silicone gel screen protectors into letting anyone unlock your phone. (Samsung is fixing that flaw.)

It's probably no coincidence that the high-end smartphone maker seems to be trending away from fingerprint readers — you won't find them on the latest iPhones or on the Pixel 4. So it's possible this could be Samsung joining the crowd with this rumored Galaxy S11 feature.

Or it could be much ado about nothing. Weinbach notes in a follow-up tweet that there's no guarantee the Galaxy S11 will have 3D facial recognition a la Face ID — just that it will have some form of facial scanning. So it's entirely possible the S11 could continue to use the in-display fingerprint reader and basic facial scanning that it incorporated into this year's phones.

We'll have a better idea of what Samsung is planning for the Galaxy S11 as we get closer to its release date, which is rumored to be sometime in February.