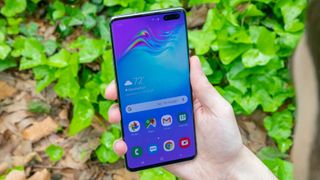 Following in Google’s footsteps, Samsung may be working on a motion sensor like the one in the Pixel 4, which could debut on the Samsung Galaxy S11. But maybe, just maybe, something tells me that this parlor trick shouldn’t become a trend.

In a new October 30, 2019 application with the European Union Intellectual Property Office found by the Dutch tech blog LetsGoDigital, Samsung wants to trademark the name ISOCELL-Motion for “dynamic vision sensor for object and motion detection; motion detection sensors: object detection sensors; camera image sensors for smartphones and tablets.” The Korean company uses Isocell to name its sensor chips, like the 64MP Isocell Bright GW1 or the 108MP Isocell HMX camera chip that may end up in the Galaxy S11 too.

As we know, the concept is not new. LG first implemented this with its G8 ThinQ phone. And now Google has the Pixel 4, which incorporates a radar chip that is capable of capturing motion, analyzing your hand motions and detecting your presence to let you do things like change the volume, skip tracks, wake up the screen, and… well, that’s basically it.

When we tried the LG G8 ThinQ, our conclusion was that it was a “good phone marred by gimmicks.” And while the expectations for the radar chip in the Pixel 4 were high — promising really granular motion detection, down to the tip of your fingers — it appears that it is a gimmick too. At least for now. There’s really no killer app for this feature yet and while it may be convenient to have your screen wake up when you get anywhere near the phone, it's yet to become a game-changer.