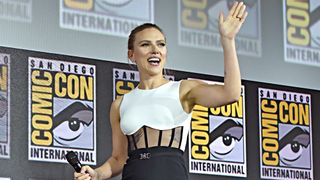 Apart from the presumption it'll star Black Widow, you may wonder what kind of intel we have on the Natasha's first spinoff (especially after what happened in Avengers: Endgame). We’ve gathered everything there is to know about the Black Widow movie and organized it below for your convenience. From the release date to the timeline, here's everything we know so far about Black Widow's solo debut.

BLACK WIDOW!!! Official D23 poster I had the honor of painting. This character is very near & dear to me since this is like the gazillionth time I’ve concept designed/painted this iconic Avenger. What a cast, what a crew, this is gonna be a good one! #BlackWidow #Avengers @MarvelStudios #ScarlettJohansson @FlorencePugh @dkharbour #RachelWeisz #Taskmaster @DisneyD23 #D23Expo #D23Expo2019 Andy Park

Black Widow movie release date: when does it come out?

Is there a Black Widow movie trailer yet?

Marvel released an official teaser trailer for Black Widow on December 3, 2019. Take a look below.

Who is the director for the Black Widow movie?

The Black Widow movie marks the first MCU installment directly solely by a woman, with Cate Shortland at the reigns. Apparently the studio met with more than 70 filmmakers for the job before landing on the esteemed Austrailian director. Known for Berlin Syndrome (2017), Lore (2012), and Somersault (2004), Shortland is working with Blacklist writer Jac Schaeffer’s script to deliver a powerful moment for Natasha Romanoff.

Who is the Black Widow movie villain?

Check out this 1st reveal of the keyframe illustration I did for the Black Widow film... & TASKMASTER!!! #blackwidow #taskmaster @MarvelStudios #scarlettjohansson pic.twitter.com/c4504e6BEuJuly 21, 2019

Every superhero movie needs a supervillain. Black Widow’s foil is the Taskmaster, a malicious mime with the power to instantly replicate any physical action they see courtesy of photographic reflexes. So they can shoot arrows like Hawkeye and chuck a shield like Captain America as long as they see them do it first. We still don't yet know who will play the longtime Marvel Comics villain.

Black Widow movie plot and timeline: when does it take place?

We know the film will be a prequel, given Black Widow’s sacrifice in Endgame. President of Marvel Studios Kevin Feige confirmed the movie is set between Captain America: Civil War and Avengers: Infinity War. It might explore the time when she was on the run following the Sokovia Accords. The Black Widow movie also may shed some light on Natasha’s life before she joined as a S.H.I.E.L.D. agent. But these are just speculations. While audiences know her journey as a selfless—yet badass— member of the Avengers, very little has been revealed about her KGB history.

Who's in the Black Widow movie cast?

Scarlett Johansson reprises her role as Black Widow from the previous MCU films. David Harbour (Stranger Things) joins her, playing Alexei Shoskatov, a.k.a. the Red Guardian. The Red Guardian is the communist response to Captain America.

Florence Pugh (Little Women, Midsommar) is playing Yelena Belova, who Black Widow is seen fighting, then drinking with in the Comic-Con teaser. She’s described as a sister figure to Natasha.

O-T Fagbenle (The Handmaid’s Tale) is Mason, a character from Natasha’s past who Fagbenle describes as “a fixer.”

Rachel Weisz is Melina, a mysterious spy who underwent the Black Widow training project like Natasha. And also like Natasha, she was cycled through the notorious Red Room where young female recruits are groomed into deadly Russian assassins. Our guess is she’ll double as the Taskmaster, especially after Weisz said her character is “very involved in some scientific research.”

Are there any Black Widow set photos?

The same user spotted the Taskmaster in costume.

A better look at Taskmaster in ‘Black Widow’! pic.twitter.com/Z3COOYZlqfJune 27, 2019

We’re not exactly sure what’s happening in this series of shots, but it looks like an epic on-road battle is in Black Widow’s action scene lineup.  How soon can we pre-order tickets?