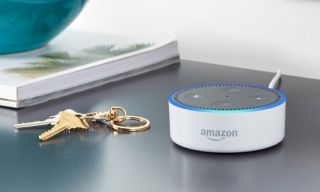 Amazon is renown for using algorithms to match or beat prices from other retailers, but Newegg has managed to outsmart the Seattle-based giant with an Echo Dot deal that beats Amazon's current sale.

Newegg is offering the Amazon Echo Dot for $39.99 and throwing in a $10 Newegg gift card, which you can use to buy whatever you want. If you count the gift card, that beats both Amazon's and Best Buy's current Echo Dot prices by $10.

The Echo Dot is no stranger to deals. Amazon regularly discounts its hockey puck-shaped speaker throughout the year. On Black Friday, we've seen it drop as low as $29.99. But it's rare to see another retailer beat Amazon at its own game, especially on a deal for one of the retailer's own devices. Nevertheless, Newegg's sale is valid through Saturday, April 21.

If you prefer an Echo, Amazon holds the best price for that smart speaker, which is currently $15 off and priced at $84.99.