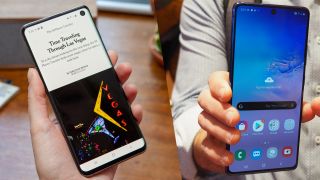 The Galaxy S10 lineup released by Samsung last year produced some of the best Android phones you can buy. But with prices of $899 and $999 for the S10 and S10 Plus, respectively, Samsung's flagship is out of the range of many smartphone buyers who balk at paying that much.

What's a phone maker to do? Follow the lead of rival companies like Google and come out with a scaled-back version of that flagship phone that does away with some features in the name of making things more affordable.

That's the case with the Galaxy S10 Lite, announced this month by Samsung and given a coming-out party at CES 2020. The latest S10 model has a lot in common with its older siblings, but it drops some features in order to offer a lower price.

Here's where we're in for a bit of mystery, even after Samsung announced the Galaxy S10 Lite. While we know the specs of the new phone, and we've had a chance to handle it at CES 2020, we still don't know what the S10 Lite costs, when it will be available or what countries Samsung will release it in.

You would figure that the S10 Lite will cost substantially less than the Galaxy S10, which debuted last year with a starting price of $899. And with the Galaxy S10e costing $749, that should mean an even lower price for the S10 Lite. As of this writing, Samsung is knocking $200 off those prices when you trade in an eligible phone, though that may not have an impact on what it ultimately charges for the S10 Lite.

If network is congested, users may notice reduced speeds / 600kbps mobile hotspot
View Deal
at
Verizon Wireless
We check over 130 million products every day for the best prices
View All Deals
powered by

Complicating matters further is that Samsung will be introducing a new flagship phone a month from now. The company will hold a press event on Feb. 11, where it's all but certain to show off the Galaxy S11. That could mean the S10 family — including the Lite — will be priced to appeal to people who balk at paying top dollar for the latest flagships.

The Galaxy S10 introduced the world to the Infinity O display, which features a hole punch for the front camera. That's on the right side of the screen for the S10 and S10e, but the S10 Lite moves it to the center, much like the Galaxy Note 10.

You get a wider choice of colors with the Galaxy S10, which is available in Prism Black, Prism White, Prism Blue and Flamingo Pink. (Outside of the U.S., there's also a Prism Green option.) The S10 Lite just features the black, white and blue Prism options.

You'll get quite a different camera setup on the Galaxy S10 Lite, even though it has three rear lenses, just like the Galaxy S10. (The Galaxy S10e makes do with just two rear cameras.) The difference lies in which cameras Samsung has selected for the S10 Lite.

It's the third lens that marks the biggest departure from the regular S10, which features a telephoto lens to support an optical zoom. The S10 Lite goes a different route with a 5-MP macro lens that figures to assist with shooting objects close up, but it sounds like you'll have to rely on a digital zoom when you want to zoom in on a subject.

Up front, the S10 Lite features a 32-MP selfie cam, which sports more megapixels than the 10-MP front camera on the S10 and S10e. The S10 Plus has two front lenses to aid with portrait effects — something you won't get with the S10 Lite.

There's little difference in the mobile processor powering these different S10 models. Like the rest of the S10 family, the S10 Lite runs on a Qualcomm Snapdragon 855 processor. That was Qualcomm's latest and greatest chipset when the S10 debuted last year, but the chip maker has since introduced the Snapdragon 865, which could explain why the 855 is powering a so-called Lite version instead of a less powerful mobile processor.

We'd expect the Galaxy S10 Lite to come pretty close to the S10 on benchmarking tests, though the extra memory on the S10 may give it a slight edge. We'll need to test Samsung's new phone to confirm.

The S10 Lite does sacrifice in the areas of memory and storage. You get either 6GB or 8GB of RAM with the S10 Lite, similar to the choice you have with the Galaxy S10e. The Galaxy S10 only comes in an 8GB configuration. With Samsung's older S10 models, you have a choice in storage options — 128GB for the base model and either 256GB for the S10e or 512GB for the S10. As for the S10 Lite, you're stuck with 128GB of on-device storage.

Battery power is one area where you're not sacrificing at all with the Galaxy S10 Lite. In fact, we wouldn't be surprised if Samsung's Lite phone outlasts the regular S10.

That's because the S10 Lite comes with a 4,500-mAh battery, a massive upgrade over the 3,400-mAh power pack inside the S10. The latter phone lasted 10 hours and 19 minutes on our battery test, in which we have the phone surf the web continuously over LTE until it runs out of power. The S10's result is slightly above average for smartphones, so you'd think the S10 Lite and its bigger battery should top that, even with the S10 Lite's bigger screen. (The S10 Plus has a 6.4-inch screen, after all, but its 4,100-mAh battery helped it last 12 hours and 35 minutes on our test, placing it among the longest-lasting phones we've tested.)

You won't be able to wirelessly charge your Galaxy S10 Lite, which also means that the Wireless PowerShare feature that lets other S10 models charge up other devices isn't available here. The S10 Lite does support 25-watt fast charging, though.

You won't find much difference between these Galaxy S10 models when it comes to software. The S10 Lite ships with Android 10 and Samsung's new OneUI 2.0 interface out of the box, while other S10 models are upgrading to the new OS, having shipped with Android 9 Pie last year.

A lot of the Galaxy S10 Lite's appeal will depend on just how much Samsung charges for the phone and, to a lesser extent, how big a feature gap there will be between this budget-minded phone and the Galaxy S11 coming next month.

The trade-offs between the S10 and the regular S10 are notable, if not deal breakers for most people. Colors may not be as accurate on the S10 Lite's display, but you're getting a bigger screen. You can also expect performance that's comparable to Samsung's more expensive S10 models, and battery life could be better. The biggest sacrifice appears to be in the cameras, particularly if you use zoom for a lot of shots and need a good telephoto lens.

We'll have a more definitive verdict on how the S10 Lite compares with other S10 models once we have a chance to thoroughly test this new phone.