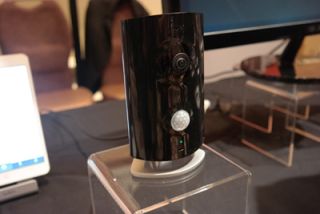 LAS VEGAS — The Piper NV smart camera is back for CES 2015, and it's ready to spy on your household with more precision than ever. Keeping all the security features of its predecessor, the $249 Piper NV adds precise night vision to keep track of what may lurk in the shadows of your home when the lights go out.

To support night vision, Piper NV has some improved guts; inside the device is a faster ARM processor and an upgraded 3.4-megapixel camera, the latter of which can catch the finer details of your home in low lighting conditions. The camera also has a 180-degree field of view for both day and night monitoring — the highest of any smart home security camera available right now.

Otherwise, Piper NV looks nearly identical to its predecessor. Available in black or white, it’s a rectangular device with a curved front that sits atop a small metal base. No one coming or going from your home will mistake this for anything but a security camera, thanks to the circular lens that bulges out from the front of the device.

Piper NV builds on the original Piper’s features: it monitors your home and takes video whenever you want it to. Using its companion app, you can program Piper NV to notify you when unknown motions have been detected in your home, or even when suspicious sounds or changes in lighting and temperature occur. You’re not just limited to one room with one Piper — you can connect up to five different Piper cameras in your home and control them all from the app.

The company is also working on expanding Piper NV’s ability to be a smart home hub. You can currently connect Z-Wave devices, like Z-Wave light bulbs, to Piper and control them through the app.

We’re curious to see how crystal clear Piper NV’s night vision actually is, so stay turned for a full review in the coming months. Piper NV will be available on Jan. 21 for $269, while the original Piper will continue to retail for $199.