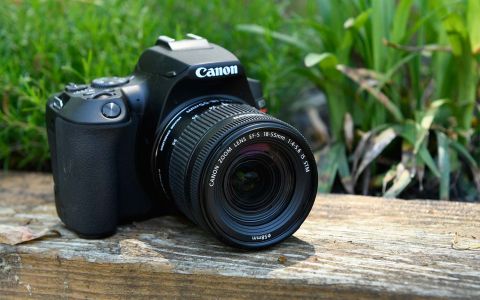 Get the Canon EOS Rebel SL3 if you want a basic DSLR that’s small, lightweight, easy to use, takes good pictures, and has great battery life.

The successor to the Canon EOS Rebel SL2, the Canon EOS SL3 ($650 with an 18-55millimeter lens) offers a few improvements, such as a faster processor that delivers better battery life and 4K video. Continuous eye-detection auto focus has also been added, but there are some changes that are questionable, including a hot shoe that doesn’t work with third-party flashes. Still, the SL3 is a good value, especially for beginners.

Who is this camera for?

First-time DSLR owners, families and picture-taking enthusiasts on a limited budget will appreciate the Canon EOS Rebel SL3’s price, ease of use, and built-in guidance. There are enough features to allow those interested to explore all facets of photography – while learning about fundamentals such as shutter speed, aperture and depth-of-field via the onboard help system. But you can just as easily use it as a point-and-shoot camera.

Vloggers will likely make this their go-to camera thanks to its side-hinged, fully articulated touchscreen. And there’s a 3.5-mm microphone jack to ensure higher quality audio for videos.

The smallest and lightest DSLR on the market (as of April 2019), the Canon EOS Rebel SL3 measures 4.82 x 3.65 x 2.75 inches and weighs 15.84 ounces with battery and card. Although it’s light, there’s enough heft to the body that it feels well balanced, even when the kit lens is fully extended. The SL3 is available in black or white, and features a deep grip that’s comfortable for both smaller and larger hands.

Canon is one of the few companies that seems to realize the importance of a fully articulated monitor and, despite being an entry-level model, the SL3 features a side-hinged touchscreen LCD, like its predecessors have. Since the monitor can be adjusted to any angle needed, it’s perfect for capturing overhead or low-to-the-ground shots, as well as selfies. Vloggers will especially love this feature.

Thanks to the vari-angle screen, I was able to capture this low angle shot without having to get on the floor.

The touchscreen is very responsive and fully functional — you can touch it to focus and scroll through menus, select settings, and swipe through images in playback.

Using the Live View monitor instead of the viewfinder provides users with a real-time view of settings adjustments. This is new for the SL3 and a great learning tool. Change the white balance and the results are immediately visible. Same thing for exposure; you know what you’re going to get before you snap the shutter and will have many more keepers on your SD card.

Other benefits of using Live View include being able to access the excellent Dual Pixel CMOS AF with Eye Detection AF. The latter works well when tracking a subject, keeping the focus on their eye.

External buttons are clearly labeled, and the menu system is well organized and easy to navigate. Better yet, users have a choice of a standard menu or Canon’s guided display; the latter uses text and visuals to show what each setting does. For example, when the camera is set to TV on the mode dial (Time Value or shutter-speed priority), the monitor displays a slider to adjust the shutter speed, showing an icon of a blurry person running at the lower end of the shutter speed and a sharp, “frozen” running person at the other end. This visual communication on how shutter speed affects a moving subject is clear, concise and easily understood.

I tested the camera with the kit EF-S 18-55mm IS STM kit lens. Images were  colorful, with just the right amount of saturation and vividness. I shot test images with the Standard Picture Style settings, but optional Picture Styles (Auto, Neutral, Portrait, Landscape and more) settings can be tweaked to adjust parameters such as saturation, sharpness, contrast, etc.

And, if you decide that you want to add a little style after the fact, you can use the Creative Assist feature to adjust saturation or apply tones (sepia, blue and others) to your RAW images and save them as new JPEGs. It’s a fun way to explore different options without losing your original files.

The SL3 does a good job of balancing highlights and shadows in settings with a lot of contrast. The images retain details in darker subjects, like this barn with a bright blue sky overhead.

Although the SL3 uses the same battery as its predecessor, the new camera’s DIGIC 8 processor increases battery life more than two-fold, to between 1000-1600 images (depending on whether you use flash, etc.) when shooting with the optical viewfinder. Switch to Live View and it drops to between 300-350; still, that’s better than the 240-260 Live View shots on the SL2.

The SL3 is one of the first budget DSLRs that can shoot video in 4K, but resolution isn’t everything. Sure, the videos look good,with pleasing colors and generally accurate AF. But, for some reason, Canon decided to drop the 24p (24 frames per second) for full HD (1920 x 1080) video, so you’re left with 30p and 60p. While this may not be a big deal for most people shooting home movies, it’s one of those odd omissions, since 24p is pretty much the standard for cinema, delivering nice, smooth footage. At 30p, footage — particularly of fast-moving subjects — is likely to be a little jerky. Switch to 60p, which is available for full HD, if you’re filming sports.

Perhaps the biggest video disappointment is that, unlike with the Full HD and standard HD settings, you can’t use Canon’s Dual Pixel AF when shooting in 4K. AF isn’t bad, but if one of the alleged selling points of a camera is its 4K video, then one expects more than just contrast-based autofocus.

MORE: DSLR vs. Mirrorless Cameras: Which Is Better for You?

The SL3 has a digital-stabilization option for video, but it crops the image and isn’t terribly effective when you’re walking with the camera in your hands.

Unlike the SL2’s flash, which automatically pops up when there’s not enough light, the SL3’s flash must be manually opened. This may not be a big deal and, in fact, some might prefer not having the camera take control over if/when the flash fires. However, if you’re a beginner, how do you know when you need flash?

The only time you’ll be alerted directly that a flash is needed is when the camera is set to Intelligent Auto (the green button the mode dial). It’s not so much having to physically raise the flash that’s an issue; rather, it’s knowing when the flash is needed. That said, flash exposure was generally accurate and produced even coverage.

Canon changed the hot shoe for the SL3 and removed a sync pin, which allows third-party flashes and triggers to be used with the camera. Right now, the only external flashes that will work with the SL3 are those manufactured by Canon. However, we’ve heard rumors that at least one third-party flash manufacturer is working on a solution. If you don’t plan to use an accessory flash or have a compatible Canon flash, then this is not an issue. But it is something to be aware of.

While mirrorless cameras have become increasingly popular, there’s still a market for affordable, entry-level DSLRS. With the Canon ELS Rebel SL3, photographers get the basics in a tried-and-true form factor with a solid — if not overly sophisticated — set of features. And, thanks to its guided menu and built-in help, the SL3 is an excellent learning tool.

If 4K video isn’t a necessity, the Nikon D3500 ($396 with an 18-55mm lens) offers great picture quality, extensive in-camera retouching. Battery life is great at 1,550 shots-per-charge, and beginners will make good use of its built-in help system. Unlike the SL3, however, the Nikon D3500’s LCD is fixed and doesn’t offer any touch capabilities.

Among mirrorless cameras, the speedy Sony A6300 ($498 with a 16-50mm lens) isn’t much bigger or heavier than the Canon SL3. And while the Sony has a tiltable LCD, it doesn’t fully articulate like the SL3; nor is it touchscreen capable. Given Sony’s dense menu system, you’ll need a little patience to navigate settings. And the Canon SL3 outperforms the A6300 when it comes to low light/high ISO shooting.

Despite a few drawbacks, such as a proprietary hot shoe and a flash that must be manually activated, the Canon Rebel SL3 is a very good beginner camera — and one of the few that records video in 4K.