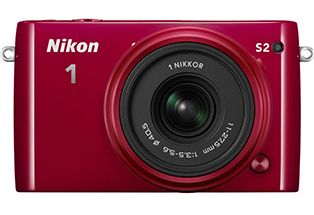 Nikon has added two new petite models to its mirrorless Nikon 1 line, with the 18.4-megapixel J4 and the 14.2-megapixel S2 . Both interchangeable-lens cameras offer a number of upgrades from their predecessors including an increased ISO light sensitivity range to 12,800 (for shooting in very low light). Both cameras are also more compact and lightweight than their predecessors.

Other enhancements include the ability to rapidly shoot and analyze 4 photos and combine them into one to reduce image noise (graininess). There are a number of creative options for both still and video capture, including Toy Camera, which makes photos of life-sized scenes look like toy miniatures. The creative effects are shown in the live preview before you snap the picture.

HD and slow-motion video recording, with electronic vibration reduction and the ability to capture still photos and video at the same time, are only a few of the enhanced movie options. Jump Cut, Fast Motion and other effects have also been added. Both cameras can shoot 1080p full-HD video at 60 frames per second. The J4 can also capture 720p HD video at up to 120 fps, to play back at 2x slow motion.

Nikon promises fast start-up times and a staggering 20-frames-per-second continuous shooting mode at full resolution, which it claims is the fastest shooting speed for such cameras. (This matches the performance of the recently released Nikon 1 v3.) Though Nikon hasn't specified, achieving this speed may require measuring exposure and focus just once, at the first shot, rather than for each of the 20 photos. The J4 boasts better autofocus technology, using both point-and-shoot-style contrast detection and DSLR-style phase detection working together to lock on a subject. It's a combo we are seeing in other high-end mirrorless cameras. The S2 offers only the slower contrast detection method, though even this has improved greatly in newer cameras. (For more on focus technology, see Why Autofocus is the New Megapixel.)

Both cameras are more compact and lightweight than their predecessors. The J4 measures 3.9 x 2.4 x 1.1 inches and weighs 6.8 ounces. The S2 is 4 x 2.4 x 1.2 inches, at 6.7 ounces. To save space, the new cameras use tiny Micro SD memory cards (like those found in some smartphones) instead of the larger SD cards of their predecessors.

The more sophisticated of the two, the J4 is equipped with a new, high-resolution touchscreen, with touch shutter — so you can easily snap a photo with a tap of the screen. The J4 also offers built-in Wi-Fi, for sharing images via mobile devices (the S2 requires a Wi-Fi adapter). The J4 also offers a panoramic shooting mode, while the S2 does not.

MORE: DSLR vs. Mirrorless Cameras: Which Is Better for You?

Also new is an amphibious flash. The SB-N10 is compatible with all three waterproof cases for Nikon 1 cameras (WP-N1, WP-N2, WP-N3). It  also works with the previously released waterproof Nikon 1 AW1 mirrorless camera (a rugged model that doesn't require a housing to go underwater). The WP-N3 Waterproof Case and SB-N10 Speedlight will be available in May 2014. Nikon hasn't announced prices yet.

Other camera and lens combinations