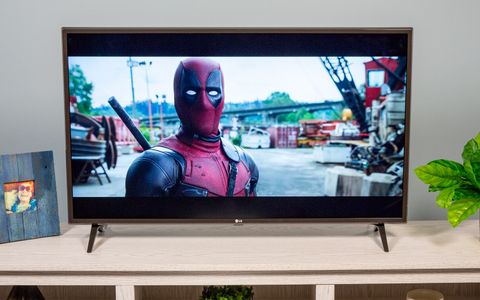 The 43-inch LG UK6300 is a pretty great 4K TV for under $400, with good picture quality, convenient smart TV features and decent sound.

The LG UK6300 ($349) is a 43-inch smart TV from one of the top TV makers in the industry. Though small, the compact LCD TV boasts 4K resolution, decent HDR support, solid audio and a full-featured smart TV experience, all for less than $400.

The LG 43-inch UK6300 is a compact, budget 4K TV, and as such has a fairly plain design. The one touch of elegance in the function-first design is the look of the attached feet: Instead of the angled designs used on so many inexpensive models, they stick out forward and back at straight 90-degree angles from the display. The chassis and attachable feet have plastic construction, and the backside of the TV will accommodate a VESA 200 mm x 200 mm wall mount.

But it's also worth noting that this is about as small as you'd want to go with a 4K display. At this size, the optimal viewing distance is only a few feet, so it's good for a smaller room, like an apartment or dorm room.

The LG 43UK6300 has two input panels on the back side, one facing to the left and another to the back. The left-facing panel offers two HDMI ports (including one with ARC support) and a single USB input. The rear-facing panel includes component and composite video inputs, a second USB port, a third HDMI connection and an RF coaxial connection for antenna and cable, and an Ethernet port for wired networks. Wireless connectivity includes 802.11ac Wi-Fi and Bluetooth.

The LG 43UK6300 offers all the right display features for an inexpensive 4K set. It has a 43-inch display with 3840 x 2160 resolution, an IPS panel and a 60-hertz refresh rate. Watching a scene from Spider-Man: Homecoming, the colors all seemed bright and true, whether it was Spider-Man's red-and-blue suit, or the blue skies and green lawns of the National Mall near the Washington Monument. Detail is also excellent: Fine textures on cloth and small details on props were easy to discern.

With basic edge-lit backlighting, it offers no local dimming, but HDR is supported, with compatibility for both HDR10 and HLG formats. When viewing a scene from Arrival, a brightly lit entrance to a dark tunnel popped against the passable black levels the set offered, but a halo of unwanted light spilled over from the sharply defined edges of the passageway.

The LG impressed us in lab tests, with a color gamut of 99.8 percent. That's on a par with the TCL 43S517 (99.8 percent), but both are outliers in a price category where most models fail to top 98 percent.

Viewing single-color test screens, it was easy to spot shadows in the corners of the screen. It's bad enough that you'll likely notice it in brightly lit scenes of TV shows or movies. Viewing angles are limited, and instead of simple color shifting, off-angle viewing results in severe darkening of the screen. One or two people can watch the TV comfortably, but a third would have real trouble making out what's on-screen.

When we hooked up our Xbox One X, the TV detected the game console right away. It offers 4K resolution, but doesn't support gaming in HDR or 10-bit color.

Built-in TV speakers are notoriously mediocre, but the UK6300 manages to offer acceptable sound quality compared to other inexpensive sets. That may sound like faint praise, but thanks to strong volume and clear audio, it does sound better than similarly priced competitors.

The LG 43UK6300 is outfitted with a pair of 20-watt speakers and offers support for simulated Surround Sound. Listening to Phantogram's "Funeral Pyre," I heard Sarah Barthel's vocals clearly, and the speakers produced room-filling volume without any trouble.The bass levels aren't fantastic, but given that the TV has no subwoofer, it offered better low-end sound than I expected — and certainly better than most inexpensive TVs will offer.

MORE: Best Soundbars for the Money

As always, our general advice concerning TV audio is to invest in a soundbar and not rely on the speakers built into the TV.

First, the good news. The LG 43UK6300 has the same webOS smart TV interface seen on the manufacturer's other TVs. There's nothing watered down about the app selection, the streaming and content-sharing capabilities or the ThinQ AI voice interaction (which includes Google Assistant capability). That's great news, because we consider LG's smart TV platform to be one of the best, thanks to its clean, ribbon-style menu, well-stocked app store and navigable settings options. Everything you'd want on the software side of things is there.

The bad news is that LG doesn't include all of the necessary hardware to take full advantage of things. The TV supports voice search through the powerful ThinQ AI assistant but there's no mic in the remote to enable this interaction. I had hoped to see this functionality offered through LG's accompanying app, but it wasn't. In order to get voice interaction, you'll need to either buy LG's Magic Remote yourself, or pair your TV with a Google Home- or Amazon Echo-style product.

One of the most dramatic differences between LG's more expensive TVs and the 43UK6300 is the remote control. Instead of the wand-like Magic Remote you'd find included with the LG 55-inch C7 OLED (OLED55C7P) or LG 65SK9500 Super UHD, you'll get a smaller basic remote. This basic remote has 46 buttons, with number keys, channel and volume adjustment, media playback controls and navigation buttons for the smart TV menus.

It has none of the motion-control or voice-search capabilities offered on the Magic Remote, but not everyone sees these features as a must have. What feels like a bigger omission is the absence of the Magic Remote's clickable scroll wheel and directional pad, which make navigating the home screen and other menus so convenient. Instead, the remote falls back on basic buttons, of similar size and shape and with the same rubber texture as the 40-odd other buttons on the remote's face.

The LG 43-inch UK63000 is an excellent smaller option for anyone who wants 4K quality. It's a good fit for smaller rooms and offers almost everything you'd want in a smart TV. We do wish it came with LG's Magic Remote, if only to add convenient voice interaction, but that's a feature not everyone will miss.

Compared to our budget favorite, the TCL 43S517 Roku Smart 4K TV, the LG 43UK6300 is missing a couple of features, like Dolby Vision HDR and Dolby Atmos sound, but that speaks more to the TCL's excellent value than anything else. At the end of the day, the LG UK6300 is still a great choice for getting a full-featured smart 4K TV for under $400.