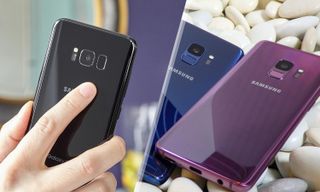 Now that Samsung has unveiled its latest smartphone, the Galaxy S9 promises more advanced cameras, a more powerful and efficient processor... and quite the price tag depending on where you buy the phone. While Samsung’s price for the S9 is actually a little bit less than what the S8’s debut price, some carriers are charging nearly $800 for the new phone, with the S9+ commanding more than $900 at some locations.

You don't necessarily have to resign yourself to spending a huge chunk of cash just to get a high-end flagship phone. There's a perfectly powerful smartphone on the market right now, and it's likely to see a big price cut in the coming weeks.

That would be the Galaxy S8, the model that the upcoming S9 is looking to brush aside.

It may seem counterproductive to spring for last year's phone when the S9 promises improved specs, particularly when it comes to the device's cameras. But the S8 is a pretty formidable phone in its own right, as it was our top-ranked smartphone for most of 2017. And you'll soon be able to buy one for a lot less than you would have had to pay just a few weeks ago, with prices already dropping at some retailers.

Here's a closer look at what you can expect to save should you opt for a Galaxy S8 over a newer S9, along with what you're potentially giving up in exchange for a lower price tag.

No one can say with any certainty just how much the Galaxy S8’s price is going to drop now that pre-orders will start for the S9 on Friday (March 2). But if past pricing for previous product launches is any indicator, that S8 price could be slashed in a hurry.

In general, phone prices tend to drop by 15 percent over 12 months.

That's what happened a year ago when the Galaxy S8 debuted, and the Galaxy S7 suddenly became less of a hot commodity, according to Lindsay Sakraida, director of content marketing with deal discovery service DealNews. "Last year, after the S8 was announced, we found deals on the unlocked 32G S7 for as low as $380, which was $370 off list price," Sakraida told Tom's Guide when we spoke to her prior to the S9’s debut. "We also saw the 128GB version for $570. So before the [S8] was available in stores, we only saw discounts on the unlocked S7."

That changed once the S8 launched in April 2017. By then, Sakraida added, wireless carriers were cutting the monthly payment for S7s bought on installment plans. The S7, which had a debut price of $670, fell to about $575 to $600 in the months after the S8's release, according to DealNews' figures. These days, you can find the S7 available for $449 on Amazon.

Price-tracking site CamelCamelCamel backs up that data, showing the price on the Galaxy S7 from third-party sellers taking a noticeable dip (see below) in the spring of 2017, as the S8 hit the market. Prices for even older models like the Galaxy S6 follow a similar trend.

The S7's price drop when the S8 came out may have been something of an outlier, DealNews' Sakraida warned. "The S7 was a fine phone, but for many shoppers, it was mired a bit by the Note 7 fiasco, so it's possible the S7 was more aggressively discounted than the S8 will be when the S9 is announced," she added.

Still, look for discounts on the unlocked S8 in the aftermath of the S9's announcement, according to Sakraida, with lower monthly payments on the older phone coming from carriers once the S9 starts shipping.

As of this writing, both Samsung and major wireless carriers are still charging more than $700 for the Galaxy S8, though that’s likely to change once the S9 goes on sale. It’s a different story at retail websites, where some unlocked versions of the S8 now sell for less than $650. Certified refurbished phones can be had at even lower prices. And again, this is before pre-orders have even begun on Samsung’s newer phone.

What You're Giving Up

So you're getting a less expensive phone if you opt for the Galaxy S8 over the newer S9 — currently $100 cheaper and likely to drop further. What features are you sacrificing in the name of lower costs?

The biggest enhancements in the Galaxy S9 focus on photography. The new phone features a 12-megapixel rear shooter with an adjustable aperture: in low-light settings, the aperture will widen to f/1.5, while it can also narrow to f/2.4 to capture more detail on wide-angle shots. The S9 still sports a single rear camera like the S8 and S8+, while dual lenses now feature on the larger (and more expensive) Galaxy S9+.

MORE: Galaxy S9 Super Guide: Everything You Need to Know

We’ve had the chance to take some initial test shots with the S9 — we’re still working on in-depth head-to-head comparisons with other phones, but these pictures give us the chance to get a sense of how the S9’s upgraded camera performs. Generally, we noticed better performance in lower light, though color accuracy isn’t as strong in some situations.

"I definitely think people should consider the S8 once the S9 becomes available, especially since the carriers will offer price deals." — Christine Gallup, WhistleOut

The Galaxy S9 is also powered by the new Snapdragon 845 mobile processing platform from Qualcomm. We've benchmarked the Snapdragon 845, which will definitely offer more oomph than the Snapdragon 835 inside the Galaxy S8. It also scores better on graphics tests, and — perhaps most important — it's more energy-efficient, which will help the S9 improve upon the S8's battery life. But we still need to complete tests with the S9 itself to confirm just how big a boost you’re getting.

Finally, the Galaxy S9 runs the latest version of Android. While Android Oreo has been available since last fall, it still hasn't found its way to the Galaxy S8, with Samsung reportedly pulling a beta of the update planned for its flagships.

But with the S9 adapting the look of the Galaxy S8 right down to its extra-wide Infinity Display, is that enough to pay up for the new phone? When we spoke to Whistleout's Gallup before the S9's unveiling when most of the changes had already leaked out, she wasn't so sure.

"I definitely think people should consider the S8 once the S9 becomes available, especially since the carriers will offer price deals, and there doesn't seem to be much difference between the two models," she said.

While people who want the latest in camera technology may find the S9's changes too irresistible to pass up, the cameras on the S8 still produce quality shots. The iPhone X and Google Pixel 2 outperform the S8 in camera face-offs we've conducted, but that doesn't change the fact that the S8 remains one of the better Android camera phones, even a year after its initial release.

The S9 will undoubtedly outperform the S8 when we get some official test results, not just because of its Snapdragon 845 processor but also because Samsung is packing 6GB of RAM into the S9+. Still, the Snapdragon 835 remains a top-performing processor that can more than handle whatever you throw at it.

Consider also that there's already a healthy accessory market for the Galaxy S8, while there might be some lag before case makers and others can trot out new offerings for Samsung's latest phone. Even the DeX Pad, built by Samsung to turn your phone into a mobile PC, is backward-compatible with older phones like the S8.

Whether to pass up a new flagship phone in favor of last year's model depends a lot on what features you value. If you rely on your smartphone to capture a lot of pictures, the Galaxy S9's improvements may be worth the extra cost. Also consider how long you're planning on holding on to your next phone. While the S8 can stand up to most apps now, that may not be the case in 18 months, as updated versions of Android arrive and app makers push out more processor-intensive offerings.

Still, based on the specs and features for Samsung's new phone, the S9 isn’t that radical a departure from last year's big update. If you can live without some of the bells and whistles in the Galaxy S9, the current Galaxy S8 should be more than enough phone to meet your needs — especially with price cuts looming.

Editors' Note: This article was originally published Feb. 18. We've updated it with new information now that the Galaxy S9 specs are official.