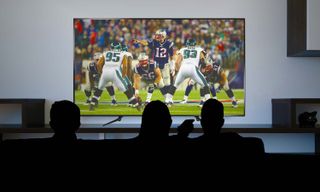 It's no secret that January is an excellent time for TV deals. Outside of the holidays, it's one of the best times of the year to score a new 4K TV. That's because retailers know that the Super Bowl is a major event and they're trying to entice shoppers with steep price cuts.

In terms of the actual discounts, we're seeing Super Bowl TV deals that are very similar to the TV sales we saw over the holidays. (Which is a good thing). For instance, Amazon is bundling a free 3rd-gen Echo Dot with any Fire TV purchase. (Amazon offered this same sale over the holidays). Meanwhile, Best Buy is slashing OLED prices by up to $3,000. The sale includes LG OLED and NanoCell TVs only.

One thing to keep in mind as you shop — the earlier you buy, the better. Remember, retailers need to ship your new TV to you and although many retailers offer expedited free shipping, the last thing you want is for your TV to be stuck in a warehouse on the morning of Super Bowl Sunday.

That said, Best Buy is offering guaranteed TV delivery and installation by Super Bowl Sunday on select TVs. Your TV must be purchased by Thursday, January 30 at 9pm local time. Keep in mind, this is the cut-off date. We recommend you purchase before that time frame.

So whether you're shopping for a new TV for a Super Bowl party or if you're just in the market for a new HDTV, here are the best Super Bowl TV deals you can score right now.

LG B8 55" OLED 4K TV: was $1,249 now $1,199 @ Amazon
The LG B8 55-inch OLED TV is the cheapest OLED TV you can buy right now. OLED technology uses individual light-emitting pixels to create fantastic contrast and perfect black levels. Despite its age, this 2018 model is still one of the best OLED TVs on the market. View Deal

Samsung QLED sale: up to 50% off @ Amazon
The mother of all Super Bowl TV deals, Amazon is taking up to 50% off select Samsung QLED TVs. The sale includes 8K TVs, 4K TVs, and even Samsung's The Frame series. View Deal

RCA 70" 4K Smart TV: was $799 now $449 @ Walmart
If you prefer a 70-inch TV with smart capabilities, the RCA RNSMU7036 is for you. It features  Smart TV Virtuoso from RCA, which gives you access to apps like Netflix, YouTube, Vudu, Pandora, and more. View Deal

JVC 70" 4K Roku Smart TV: was $899 now $579 @ Walmart
This 70-inch JVC 4K TV is powered by Roku's OS, which makes it easy to stream content from your favorite apps. For a limited time, this TV is $320 off at Walmart and one of the best Super Bowl TV deals you can get right now.View Deal

Element 70" 4K Roku TV: was $798 now $499 @ Walmart
The Element 70-inch 4K Roku TV is one of the biggest Element HDTVs you can buy. It features Roku's easy-to-use platform which gives you access to popular streaming apps.View Deal

Sceptre 65" 4K TV: was $899 now $349 @ Walmart
You'll be hard pressed to find a cheaper 65-inch TV than this Sceptre. Sure, you're missing out on smart features, but if you want a no-frills Super Bowl TV — this is the model to get. It has 4K resolution and HDR support.View Deal

Amazon Fire TV deals: Free Echo Dot w/purchase @Best Buy
Best Buy has put all of its Fire TVs on sale in a wide range of sizes from Insignia and Toshiba. Even better, you can get a free Amazon Echo Dot (3rd gen) with purchase of any of the discounted TVs. Amazon is also offering this sale via coupon code "FTVE20".View Deal

Samsung QLED TV Sale: Up to $2,000 off @ Walmart
Samsung's QLED TVs are renown for their rich colors, solid picture quality, and sky-high prices. That is until now. Walmart is slashing up to $2,000 off Samsung's 2019 QLEDs with pricing that starts at $597. It's one of the best TV deals out there for fans of premium TVs. View Deal

Sony 4K TVs w/ Alexa: up to $400 off @ Amazon
If you want a TV you can control with voice commands, Amazon is taking up  to $400 off select Sony 4K TVs with HRD and Alexa compatibility. It's one of the best Super Bowl TV deals we've seen for these models. View Deal

Sceptre 50" 4K TV: was $399 now $199 @ Walmart
It lacks smart capabilities, but if you want a big screen at a small price, you'll be hard pressed to beat deal. Walmart currently has the 50-inch 4K Sceptre LED TV on sale for $199, which is one of the cheapest Super Bowl TV deals we've seen. View Deal

LG 49" 4K Smart TV: was $379 now $278 @ Walmart
The LG 49UM6950DUB is a 49-inch 4K smart TV that gives you every app and service offered on LG's more premium TVs, but for less. The IPS panel should look good from any angle, and the HDR10 support makes movies and shows pop with brighter colors and more realistic shadows. Get it now for $278.View Deal

LG NanoCell 49" 4K TV: was $649 now $549 @ Best Buy
We get it. Not everyone can afford to drop a grand on a new TV. That's where the LG NanoCell 8 Series comes in. It uses LG's enhanced LCD display technology — a direct competitor to Samsung's QLED TVs — to offer the best LCD picture possible. At $549, it's the cheapest TV in Best Buy's sale. Amazon has it on sale for $546.99.View Deal