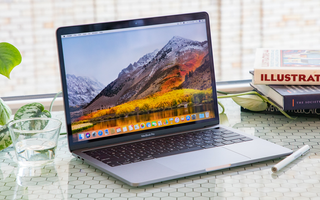 Apple's MacBooks are among the best laptops in the industry. But let's be real: They're crazy expensive. Fortunately, there are plenty of cheap MacBook deals to help soften the blow of Apple's pricey laptops.

Amazon, Best Buy, and B&H Photo are our go-to retailers for cheap MacBook deals. On any given day of the week, you're bound to find more than a handful of MacBook deals at either retailer's website.

So whether you're looking for a MacBook Air or MacBook Pro, you've come to the right place. Below we're rounding up the best MacBook deals you can get right now. Plus, we're breaking down the differences, so that you buy the right MacBook for your needs.

Not looking for MacBook deals? Make sure to check out our guide to the best Apple deals for discounts on all Apple devices.

Priced at $1,099, the 2019 MacBook Air is Apple's new entry-level laptop. The base model features a 13.3-inch Retina Display, Touch ID, 1.6GHz Core i5-8210Y CPU, 8GB of RAM, and 128GB of storage. That's pretty paltry for the price of admission, but fortunately cheap MacBook Air deals are somewhat easy to find.

Amazon and Best Buy usually have the base MacBook Air on sale at $899 or $999. (The cheapest MacBook Air price we've seen has been $799 back during the holidays). Meanwhile, the 256GB model is frequently on sale for $1,099, which is the cheapest it's ever been. We recommend opting for the 256GB model, as you get more storage for the price.

In our review of the Apple MacBook Pro 13-inch 2019 , we found it offered much better performance than the 2019 MacBook Air. That's due to the fact that it uses a Core i5-8257U quad-core CPU (or Core i7-8557U if you opt for the faster CPU), instead of a dual-core Y-series Intel processor.

How does that translate that into every day use? Well, in our video-editing test — in which we transcode a 4K clip to 1080p — it took the MacBook Pro just 14 minutes and 42 seconds, compared to 36 minutes on the Air.

The 13-inch MacBook Pro also sports Apple's 4th-gen Butterfly keyboard, which is quieter and slightly more comfortable. More important, Apple has added a new material to the mechanism to prevent reliability issues, such as accidental double presses or keys not registering.

The upgraded 13-inch MacBook Pro sports a faster Core i5-8279U quad-core CPU and comes with 256GB of storage space. It also offers four Thunderbolt 3 ports instead of just two. This "base" model costs $1,799 from Apple. Otherwise, it looks identical to the cheaper 13-inch MacBook Pros.

However, it offers even better performance than its weaker counterparts. In our MacBook Pro 13-inch review, we didn't see any lag even as we jumped between 17 tabs in Chrome while also running Skype, Slack, and Pixelmator.

The first thing you'll notice about the 16-inch MacBook Pro — aside from its large display — is its new Magic Keyboard. Apple finally ditched the controversial Butterfly keyboard on this laptop for a scissor mechanism, and it added a new keycap structure that's more concave and a rubber dome underneath for support. The result is a much-improved keyboard that delivers a better 1mm of travel (compared to less than 0.8mm before).

Performance-wise, this MacBook Pro lives up to its name. It took the laptop only 8 minutes to transcode a 6.5GB 4K video to 1080p, which is the same amount of time the Dell XPS 15 took.

Although its very pricey, 16-inch MacBook Pro deals aren't that hard to find. In fact, the deals started trickling in just after the laptop hit the market. The cheapest 16-inch MacBook Pro price we've seen has been $209 off the base model, which lowered its cost to $2,189. This deal has stuck around since the holidays and you can usually find it at Amazon.

Apple no longer sells this model, but Amazon and Best Buy still offer the 2017 MacBook Air. You may be thinking — why do you want a 3-year old Mac that uses a super-dated 5th-gen Intel processor. Well, the truth is — the 2017 MacBook Air has aged very well.

For starters, it's the last Mac laptop with a keyboard we like and recommend. It offers a pleasant typing experience, unlike the shallow keys found on Apple's current MacBooks. It also boasts two USB ports, a Thunderbolt 2 port, and even a SDXC card slot. In terms of battery life, you'll get about 10.5 hours from a single charge.

The drawbacks are the non-Retina screen and the dated design. Otherwise, this is still an excellent machine for basic, everyday tasks. In our tests, we were able to stream a 1080p YouTube video while browsing through 12 Safari tabs without missing a beat.