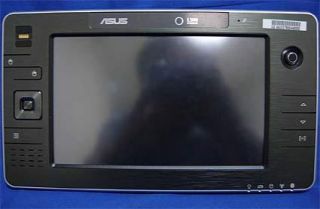 The look of the device has not changed from the original version that was released in 2006. The documents filed with the FCC indicate, however, that Asus has added HSDPA-based wireless broadband (3G) capability to its UMPC and Windows Vista is now the default operating system. Detailed specifications have not been released; we do know however that this new UMPC will not be available with a flash-based solid state disk drive.

Much of the functionality of the UMPC directly address business users and not the casual user, providing some evidence for our previously published belief that the UMPC will be pushed into a market niche in which it will be competing with today’s tablet PCs. The mass market is much more likely to see cheaper (and less capable) mobile PCs that are based on Intel’s Mobile Internet Device (MID) idea down the road.

The inside of the new UMPC: Hard drive on teh right, SIM card slot on the left.