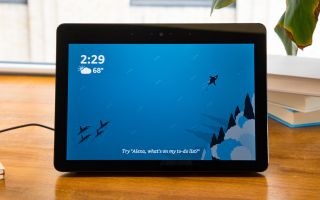 Amazon's new and improved Echo Show—our favorite smart display—is on sale for $179. It's a savings of $50, and a pretty good deal for those who want to add an Alexa-powered display to their smart home.

The second-generation Echo Show improves on the original in a number of ways. For starters, it looks a lot better; its speakers have been moved to the back, so that the front is dominated by a larger and sharper screen. The back of the Show is also covered in a mesh fabric, rather than hard plastic.

We also liked the other improvements Amazon baked into the new Show. For example, there a lot more video-based skills, so you can control Alexa-enabled smart home devices using your fingers (rather than having to ask Alexa), and follow visual recipes more closely. The Show also has two web browsers built in, which lets you get to YouTube.

Aside from making audio and video calls using Alexa, you can make Skype calls on the Show, and you can use its display to check in on security cameras and TV programs if you have the Amazon Fire TV Recast.