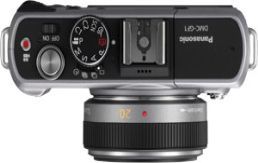 To line up your shot, you can use the GF1's LCD screen, which is large, accurate and easy to use. However, it does struggle in bright sunlight. The solution: an electronic viewfinder, sold by Panasonic as an optional extra.

While we were very impressed by the viewfinders on the G1 and GH1--480,000 pixels, a great refresh rate and a decent enlargement--we can't say the same about this one. It only displays 202,000 pixels and enlarges the image to 0.52x rather than 0.7x.

That said, it's a very practical solution that works with any lens that you use. It's flexible and includes a button to toggle between focusing on the screen and using the viewfinder.

Going against the trend for miniaturization in the electronics world, SLR cameras aimed at amateurs and professionals alike still come in relatively bulky frames.  Recently however, the new micro four-thirds format has opened the way for Panasonic and Olympus to produce less imposing cameras which are nevertheless equipped with sensors that are larger than those found on the majority of compact digital cameras.

The first models to use this new technology, the Panasonic G1 and GH1, were clearly descended from earlier generations of SLR cameras, but the Olympus Pen E-P1 and this new GF1 both represent a more radical departure from the norm.

A lot of photographers are attracted to the quality of the images that an SLR can produce, but are less certain about whether they really want to lug a big heavy camera around.  If you want a large sensor in a compact body, the only place to look is Sigma, whose DP1 and DP2 cameras, with fixed 28 mm and 41 mm lenses respectively, both share a Foveon X3 sensor in the APS-C format of 20.7 x 13.8 mm.  You can also look into cameras from Leica, but purchasing one will require a second mortgage on your house.  In the golden days of film, compacts with interchangeable lenses were much more common--the Contax Zeiss Ikon was one great example, for instance.

With the micro four-thirds sensor (17.3 x 13 mm), Panasonic and Olympus are trying to produce a more compact range of digital cameras with advanced features and the all important system of interchangeable lenses that allows the photographer to choose the right lens for the job.  The very first examples, the Panasonic G1 and GH1, although very successful, weren't truly representative of the micro four-thirds format.  We had to wait for the Olympus Pen E-P1 to see the kind of innovation some photographers were waiting for.  With the GF1, it's now Panasonic's turn to produce a genuinely compact camera with interchangeable lenses.

With a 20 mm f/1.7 pancake lens, the GF1 is a very attractive proposition.  It's not as small as the Panasonic LX3 or the Ricoh GRD III, but it will easily fit into a small bag or a large pocket, and will slide easily inside your coat.  The build quality is impeccable and the aluminum frame is a real treat to use.  All of the controls are right at your fingertips, making it very easy to get the hang of the camera.  The interface is reasonably similar to other Lumix cameras, and includes the Q-Menu button to give direct access to the main settings.  The four-way directional control allows you to adjust sensitivity, light levels or white balance on the fly, and you can program the fourth button, Fn, with a setting of your choice.  A click wheel at the back also allows you to scroll to adjust the values shutter and aperture priority in manual mode.  To switch from one setting to the other, you just need to push the wheel in, which makes it easier to switch from aperture to shutter in priority mode with just a single step.  Our only criticism is that the wheel itself is rather lightweight and would be easier to find if it were more substantial.

The top of the camera is just as well-equipped, with a popup flash (which is bright enough to avoid red eye), a hotshoe for accessories, a scroll wheel to choose between P, S, A, M and two custom modes, the shutter release and a button to launch video recording.  This last feature is an innovation borrowed from the Panasonic TZ7 and we're glad to see it.  If we really wanted to nitpick, it would have been great to have a smaller screen to show the values for the main settings like sensitivity, aperture and shutter speed to check them quickly to save battery power without activating the main screen.

Although the GF1 has a lot of features and will be a great asset to a knowledgeable photographer, the iA--intelligent automatic--mode is exceptional, and detects scenes, movements and faces all by itself.

The 3-inch LCD screen has a resolution of 460,000 pixels and is easy to use indoors.  In bright sunlight, it's too glossy, so you'll probably prefer the electronic viewfinder--though as it's an extra option, so your wallet might appreciate it less.  The display remains reasonably fluid in most situations, and the viewing angles are wide enough.  A rotating screen would certainly have been a welcome addition, but the GF1 would have been bigger as a result.

The autofocus is just as fast and enjoyable as the earlier models (G1 and GH1).  It's a lot faster than the majority of today's compact digital cameras.  Its 23 point autofocus system can keep up with entry-level SLRs and beats the Olympus Pen E-P1.  The powerful face detection system helps produce perfect portraits with good exposure.

Switching the camera on is quite fast, and the time you have to wait for images to be saved to the memory card isn't problematic.  A burst mode which struggles to reach 3 fps is disappointing.

Unfortunately, the GF1 has the same sensor as the G1, not the one found in the GH1.  Nevertheless, it still uses the Venus Engine HD image treatment chip.  The upshot of all this is that the GF1 produces good quality photos: electronic noise is well-handled up to 800 ISO, and even 1600 ISO in some circumstances.  White balancing is accurate under natural light and pleasantly warm under artificial light, though some people may find it a little too orange.

The exposure meter with 144 zones is pretty accurate, but with some photos, the results were very under-exposed.  Although it's a problem that is easy to correct, the fact that it seems to happen at random can be frustrating.

The 20 mm f/1.7 captures enough light without needing any stabilization.  Panasonic has instead included stabilization in the lenses themselves, while Olympus kept it in the camera.  Apart from a few specific cases, then, you won't be able to use Olympus lenses on this Panasonic camera--which is a shame, because Panasonic's lenses aren't the cheapest.

Some people will be disappointed to learn that the 1080p HD video mode found on the GH1 hasn't returned here, but 720p video at 60 fps is present--although it's actually interlaced, with the sensor providing 30 fps--which takes up less room on your memory card or computer.  On the other hand, the mono microphone and lack of input for an external mic are more troubling.  In AVCHD mode, the quality of the video is fine, although the autofocus is a little slow at following subjects, but it works.  If you're looking to edit your video afterwards, then Motion Jpeg is a better choice, but you'll be able to see the effects of compression if you play the video back on a large TV.  The fact that there's no image stabilization doesn't help video mode much either.

Compared to the Olympus E-P1

Although the Olympus Pen E-P1 is a more stylish with a distinctive look, the Panasonic GF1 takes the lead in just about every area: it has faster autofocus, more powerful video, a better LCD screen, an (electronic) viewfinder that works with all lenses and a built-in flash.

Panasonic has produced an excellent camera in the GF1. It's relatively small, fast and produces images whose quality is miles ahead of average compacts. Although it's not entirely free of faults, the GF1 is a great choice for anybody who's ready to try the Micro Four-Thirds format and the new lenses that go with it.