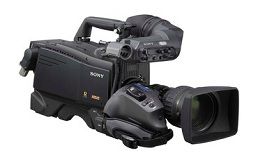 The 82nd annual Academy Awards are here, and the excitement in the air is palpable here in L.A., where Tom's Guide lives. Alec Baldwin and Steve Martin are set to host, and they should prove to be a pretty dynamic duo, and the doubling of Best Picture nominations should make this year’s awards very interesting.

That is all well and good, but this article isn’t about winner speculation (although I do hope that Inglourious Basterds or The Hurt Locker walks away with Best Picture). Unless you’re a movie buff like me, you probably overlook how a movie is shot. 35mm film, usually from Kodak, is the still the method of choice, and seven of this year’s ten Best Picture nominees were shot on film. Panavision and Arriflex are still the kings of Hollywood when it comes to Cameras and Lenses. Next time you sit down a watch a movie, wait for the credits and you’ll usually see something along the lines of “Filmed on Panavision Cameras and Lenses,” somewhere near the end.

While film is still the standard for many directors, digital has been lurking in the background for a few years. District 9 was shot using the much-hyped RED ONE, and some “shakycam” shots were captured with a Canon HF100, a simple digital camcorder that you can buy at your local retailer. RED, a company started by Oakley founder Jim Jannard, is trying to be the leader in digital cinematography, and the RED ONE is quickly becoming a favorite device among directors and cinematographers. The RED ONE can shoot at 4000x2000, making it one of the highest-resolution digital cameras on the market. This combined with a plethora of available lenses and accessories galore make it an attractive device for Hollywood directors. Also, the RED ONE is modular, meaning different lenses, battery packs, storage solutions, and other accessories are a breeze to change in or out. The major drawback to the ONE is its price: the body alone goes for over $17,000. This is hardly an issue for professional, bankrolled filmmakers, but it leaves many amateur filmmakers out in the cold. However, cameras like the Sony EX-1 or EX-3 or Panasonic HVX are great options for the director on a tight(er) budget.

You can’t talk about the Oscars or cinematography in general without mentioning the elephant in the room: Avatar. Say what you want about the story in Avatar, but the visuals and game-changing 3D are some of the best Hollywood has seen in recent memory. A lot of this has to do with the cameras used, all of which were digital. James Cameron (Director) and Vince Pace (Director of Photography) brought in several different Sony cameras, including HDC-950s, HDC-1500s and the F23.

For the 3D shots, Cameron tasked Vince Pace, the Director of Photography, with creating a new type of 3D camera. The result was the Fusion 3D system, which brings two lenses together (in Avatar’s case, two Sony lenses) onto one portable rig, with the image processing taking place off-site (or not on the rig itself). This allows the Fusion rig to capture stunning 3D images without a heavy, cumbersome camera system in tow.

Digital cinema is the future, without a doubt, but film will never completely disappear. Directors like Quentin Tarantino will make sure of that. In fact, directors are still finding new creative ways to use film, and The Hurt Locker is a perfect example. Kathryn Bigelow, who produced and directed, used four 16mm film cameras on nearly every shot in the movie. This technique gives helps to give The Hurt Locker its “documentary” feel. Also, for the high-speed explosion shots, Bigelow employed the Phantom HD Gold, which can shoot Full HD (1920x1080) footage at over 1,000 frames per second.

The next several years will be very interesting for Hollywood. Plenty of feature films are already shot digitally, but film is still the mainstay in the industry. The only segment where digital cinematography has taken over is the amateur space, primarily because it’s cheaper (there's no need to purchase film again and again). 3D will also become a dominant force over the next decade, now that Avatar has changed the way we think about 3D technology. With most TV manufacturers totally on the 3D bandwagon, it’s only a matter of time before 3D LCD TVs are in every home.