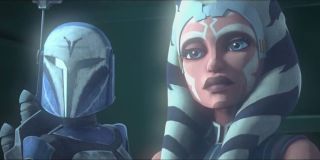 The Mandalorian is over. Good bye, Mando! See you soon, Baby Yoda! What’s in the pot, Carl Weathers? There's a good chance you may have already dropped Disney Plus unless you have kids at home. But if you are a Star Wars fan, then you have one reason to stick around for a bit longer: the long awaited season 7 of Star Wars: The Clone Wars.

Now we know that the new adventures of favorite Jedi — Ahsoka Tano, plus her master Anakin Skywalker and Obi-Wan Kenobi — are just a few weeks away. According to CBR, a Disney promotional video (now apparently offline) says that the new season is premiering on Monday, February 17.

Our best look at The Clone Wars season 7 came at Star Wars Celebration 2019, where we got a sneek peek at what's next for Ahsoka, Anakin and the Clone Army.

Our first tease of The Clone Wars season 7 came at San Diego Comic-Con 2018, which you can see below:

If you haven’t been following it for the last few years, Star Wars: The Clone Wars is an animated series featuring the adventures of Obi-Wan Kenobi, Anakin Skywalker and his apprentice Ahsoka Tano during the period between Attack of the Clones (where the Clone Wars began) to Revenge of the Sith (where Order 66 is executed).

Star Wars: The Clone Wars plot: What's it about?

In the series, the Republic is fighting against the separatist corporations [spoiler alert] who are led in the shadows by the secret Sith, Republic Chancellor and future Emperor Sheev Palpatine.

This puts our heroes against the likes of General Grievous, Count Dooku, an assassin called Assaj Ventress, and bounty hunter Cad Bane, amongst others.

How long has The Clone Wars been running?

There have been six seasons so far, one released on Netflix. They are pretty short, with each episode running around 22 minutes. So if you haven’t watched, you can easily catch up on Disney Plus before the new season drops.

Is there a Baby Yoda?

We don’t know yet! Remember that The Mandalorian happens between Return of the Jedi and The Force Awakens, just after the fall of the Empire. The Clone Wars are the events that lead to the rise of the Empire.

But maybe the new season will add some hints about where The Child aka Baby Yoda comes from?

On the positive site, there’s the actual Yoda, though. Check him out.

Yeah, it’s pretty good. If you like Star Wars, it’s worth binge watching. It’s certainly a lot more entertaining and better than the prequel and sequel movies. And it gets better as it advances.

Is Star Wars: The Clone Wars connected to The Mandalorian?

Perhaps The Clone Wars is better than most Star Wars content because of Dave Filoni. If that name sounds familiar to you it’s because you probably have seen his work in The Mandalorian.  He is one of the series’ executive producers and he directed two episodes.

Filoni was also a director on Clone Wars, in which he directed 16 episodes. He was also executive producer on Rebels — the other animated series that happens after the first Star Wars film, A New Hope — and Star Wars: Resistance.

In other words, if you liked The Mandalorian, gives this a shot.