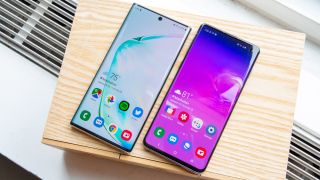 T-Mobile isn't waiting until Thanksgiving to get a jump on Black Friday deals. The wireless carrier will launch its Black Friday sale this Friday (Nov. 15), and there's a pretty intriguing offer in there if you're looking to buy one of the new flagship phones Samsung released this past year.

Galaxy S10 & Note 10 BOGO offer @ T-Mobile
Starting Nov. 15, when you buy any Galaxy S10 or Note 10 model, you can get a second phone for free by activating a new line of data with T-Mobile. There's also a BOGO offer for the LG G8 ThinQ.View Deal

As with most BOGO offers, the "free" part of the deal comes in the form of monthly bill credits, where T-Mobile reimburses you for the second phone in installments over the course of 24 months.

We include the Galaxy S10 Plus, Galaxy S10e and Galaxy Note 10 on our list of the best smartphones you can buy right now. The S10 Plus is our favorite Android phone to come out in 2019, while the S10e is a great value, and the Note 10 is an ideal big-screen phone for people who prize productivity.

The Galaxy S10 and Note 10 models aren't the only phones eligible for a BOGO offer at T-Mobile this Friday. You can also pick up a second LG G8 ThinQ for free when you buy that phone, again via monthly credits to your cell phone bill.

The latest iPhones aren't included in this sale, but if you don't mind an older model, you can pick up an iPhone 8 for free from T-Mobile when you trade-in a qualifying iPhone and activate a new line of data at T-Mobile. If you prefer a larger screen, you can opt for the iPhone 8 Plus and get a $450 discount, cutting the cost of that 5.5-inch phone to $100.

T-Mobile's holiday sales extend beyond smartphones. The wireless carrier has a BOGO deal on Samsung's Galaxy Watch, though you're required to open at least one new smartwatch line to get the second watch free. (New customers have to activate two lines.) You can get $200 off a second Apple Watch of equal or greater value when you buy one of Apple's smartwatches and activate a smartwatch line. The deal extends to the Apple Watch Series 3, 4 or 5.

Other T-Mobile deals include a free Samsung Galaxy Tab A or half-off the Galaxy Tab S6 when you activate a 6GB or higher mobile line for either tablet. Make sure to follow our Cyber Monday deals coverage for the best post-Black Friday discounts.