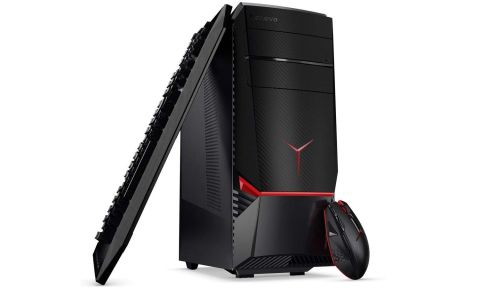 The IdeaCentre Y700 34-ISH plays games well at 1080p settings and has plenty of ports, but its included peripherals leave much to be desired.

A high-end, pre-built gaming rig can cost more than $2,000, but it's getting easier to nab a machine capable of playing the latest titles for half that price. The Lenovo IdeaCentre Y700 34-ISH ($1,050) is a moderately powerful gaming desktop that comes equipped with everything you'll need for a decent PC gaming experience. The machine can run just about any game at 10800p resolution, and features an easy-open design for upgrading it over time. The included peripherals are a bit shaky and the design may be too aggressive for some, but the IdeaCentre Y700 34-ISH is an affordable option for curious PC gamers who don't need the highest possible level of performance.

I'm not sure when red and black became the colors associated with gaming, but Lenovo (like Acer, Asus, Dell and Origin before it) decided that nothing says "this system plays games" like a dark color scheme with sharp angles that make it look like a powerful combustion engine. The Y700 34-ISH stands 19.8 x 18.9 x 8.1 inches, and weighs a whopping 33 pounds. With odd bulges and sharp angles, the machine is anything but pretty, but it is distinctive, at least.

In theory, you can control the illumination levels of the Y-shaped red light on the front of the PC, but in practice, the software gave us an error message every time we tried (we have contacted Lenovo about the issue, but have not yet received a response.) It's not a big deal, but if red lights aren't your thing, a little black tape would not go awry.

One positive thing about the design is that it has four USB ports, an SD card reader, a microphone jack and an audio jack all facing slightly upward at the very top of the machine. This makes plugging in peripherals extremely simple, and makes me wonder why so many manufacturers still insist on putting their USB ports in hard-to-reach areas.

One of the great things about owning a gaming PC rather than a console is that you can crack it open and upgrade it any time you choose. The trouble with pre-built machines is that the insides are often complicated, labyrinthine messes, crammed together as tightly as possible to save space. Thankfully, the IdeaCentre Y700 34-ISH does not fall victim to this trap, opting instead for a simple opening mechanism and a sparse, customizable interior. To open the computer, all you need to do is slide a switch that unlocks it, then hit a button to pop off a side panel. The rest is up to you and your screwdriver.

Whether or not you decide to upgrade, the IdeaCentre Y700 34-ISH is at least replete with ports. All told, there are 10 USB ports (six of which are 3.0), an Ethernet port, an HDMI port, a VGA port, a DVI port, a digital audio port and a PS/2 port, for those of you with old-school mice and keyboards. Those who want a future-proofed machine should be aware that it does not contain any USB Type-C ports, but neither do most current gaming peripherals, so it’s not a deal-breaker just yet.

The computer also comes with a DVD recordable optical drive, a Wi-Fi 802.11ac card and Bluetooth. For a machine that costs $1,000, I feel that the system could have sprung for a cheap Blu-Ray player rather than a DVD drive, but if you still install games the old-fashioned way, a DVD drive will probably be all you need.

Armed with an Nvidia GeForce GTX 960 graphics card with 4GB of VRAM, an Intel quad-core i5-6400 2.7 GHz processor and 16GB RAM, the Y700 34-ISH has enough oomph to run just about any game in 1080p at fairly high settings, but its 4K performance was not nearly as consistent.

I tested four games across a variety of genres to see how well they functioned at both 1080p and 4K settings. If you want to play StarCraft II, you're in good shape; even at 4K with all the settings turned up, I was still able to pull more than 70 frames per second.

For other games, 4K performance is a secondary concern, which is not surprising, given the device's internals. Batman: Arkham Knight maintained a steady 30 fps at 1080p, but sank to an abysmal 15 fps with all the other settings turned down in 4K. Rainbow Six: Siege ran at a spectacular 125 fps at 1080p, with settings turned up, but chugged at about 35 fps at 4K. (For what it's worth, you might get 60 fps on a console, but you'd never get 4K, so weigh your options accordingly.) Star Wars: The Old Republic pulled a steady 30 fps at 4K with other settings hovering at medium levels.

On our most demanding test — a benchmark run of Metro Last Light — the Y700 34-ISH pulled a respectable 52 fps at 1080p, but barely hit 30 fps at 4K resolution. This is in line with the games we tested qualitatively, and reinforces the idea that the system is probably best kept at full-HD or quad-HD resolutions.

While the IdeaCentre Y700 runs most (but by no means all) games respectably at high resolutions, it's frustrating that you have to lower the resolution to make the most of textures, lighting and other effects that make a gaming PC stand out over its console competitors. Running the games at 1080p leaves you with an experience that looks and plays like a slightly prettier console port.

On the other hand, the Y700 34-ISH is mostly on a par with similarly priced PCs. The Digital Storm Vanquish 4, for example, also ran Metro Last Light at around 50 fps at 1080p, and excelled at running games in quad-HD resolutions (while also not quite getting to 4K for most titles). However, the Vanquish 4 scored a 2,787 on the 3DMark Fire Strike Ultra test, which evaluates roughly how well a system can run high-end games. The Y700 34-ISH came in at only 1,046. The test is an artificial one, but in theory, the Y700 34-ISH is a bit less powerful than its competitors — which is in line with our observations.

In terms of everyday productivity, the IdeaCentre Y700 will handle anything you throw its way with ease. I was able to run about 110 processes with only 20 to 30 percent of the CPU in usage, with spikes to 40 percent. This included four video streams from Netflix, Hulu, Crackle and Twitch, plus active use of Facebook, Twitter, Task Manager, GDocs and two active game downloads. There's not much you can do to shake this machine, short of running demanding games.

In addition to a 120 GB solid state drive, the Y700 34-ISH comes with a 1TB traditional hard drive. You should have no problem storing dozens of games, hundreds of movies, or thousands of documents, depending on what you need the system for primarily.

In a test to see how long it would take to transfer files from a thumb drive, the Y700 34-ISH pulled a speed of 60 Mbps, meaning that should you choose, you could fill that 1TB hard drive respectably quickly. Keep in mind, though, that this falls well short of its competitor, the Digital Storm Vanquish 4 (221 Mbps with a 250GB SSD), as well as the category average for gaming desktops: 243 Mbps. Before you uninstall a decent amount of bloatware that comes with the system, it takes 22 seconds to boot up; not catastrophic, but not super-quick, either.

The included mouse is a small red-and-black (what else?) peripheral with a few extra thumb buttons and software that allows you to customize them. The mouse feels cheap and plasticy, and too small for most hands, but it functions as it's supposed to. The keyboard, on the other hand, is a membrane model with incredibly mushy keys and a cramped design. Worse still, it throws a backslash right next to the Enter key, rather than above it. After days of working with the keyboard, I still hit backslash about 99 percent of the times I wanted to hit enter instead. Typing passwords was a nightmare, as was doing any kind of word processing.

There's only one configuration available for the Y700 34-ISH, and it's the one described above. If you want to dish out $1,500, however, you could go for the default IdeaCentre Y700, which runs on an Intel Core i7 3.4 GHz quad-core processor and includes an Nvidia GeForce GTX 970 GPU. The other specs appear to be the same.

The Y700-ISH doesn't have much in the way of exclusive gaming software — just a system optimizer and companion software for the mouse, as described above. The system does come with DVD-burning software, so you won't need to buy anything extra if you'd rather back up your files on discs than thumb drives. In my experience, it was best to deactivate (or uninstall) the extra software, since it didn't add much to the overall experience.

In spite of some truly underwhelming peripherals, the Lenovo Y700 34-ISH offers decent hardware at an affordable price. Even if it can't run the latest and greatest titles with stunning 4K definition and eye-popping textures, it does a respectable job of playing just about any PC game on the market if you're willing to turn down the graphical settings a bit. The hardest of hardcore gamers will have to look elsewhere (or build their own machines), but if you want to know what PC gaming is all about and decide later whether fancy internal hardware is worth the cost of upgrading, you could do much worse than the Y700 34-ISH.