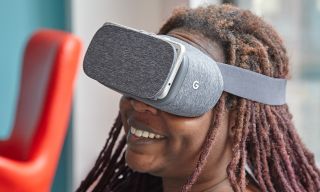 Here's a deal for anyone who wants to jump into the world of virtual reality. Verizon is offering the Google Daydream View VR Headset (2016) for just $29.99. Normally, this headset would set you back $80 so you're saving $50 with this deal.

Google's VR headset made its initial debut in 2016 and we instantly loved it for its style, comfort, VR catalog, and aggressive price.  In terms of design, the Daydream View is unlike any other VR headset. The body of the headset is covered in a breathable, yoga pants-like material, which gives it a more familiar feel than its all-plastic counterparts. An elastic fabric makes up the headset's headband to accommodate any head size and ensure a custom fit.

The built-in harness securely fits a variety of smartphones including the Pixel, Pixel XL, LG V40 ThinQ, Samsung Galaxy Note 9, and Galaxy S9/S9+, to name a few. Insert your device into the Daydream View, launch the Daydream VR companion app, and you'll have access to a wide library of VR content. Moreover, you'll enjoy up to 12 hours of virtual reality fun thanks to the headset's rechargeable 220mAh battery.

Verizon is offering the Daydream View 2016 in the slate gray only. Alternatively, you can get the Daydream View (2017) in coral pink for $39.99. That's $60 off the headset's regular price of $99.99. The 2017 version is slightly more comfy and sports an expanded field of view (FOV) than its predecessor, which makes its VR experience slightly more immersive.

The headsets are selling out fast, so take advantage of these deals to swim with seals, explore Mars, and attend VR concerts on the cheap.