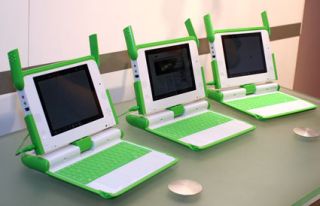 The decision to sell the XO laptop with the option of running Windows XP, or at least a modified version of XP, was announced back in May when sales for the OLPC remained in a slump. Experts felt the reason foreign governments were reluctant to place orders for shipments of the XO laptop was because the Linux-based OS lacked the recognition or reputation Microsoft or Windows has around the world. In other words, we all know Windows, not everyone knows Linux.

OLPC founder, Nicholas Negroponte, felt that the option of a dual-boot version of the XO machine would mean more sales, something the OLPC foundation can’t turn it’s nose up at. Sales figures for the end of 2008 were targeted at150 million units, however, numbers are somewhere around 600,000 mark.

OLPC president, Charles Kane praised the organizations ability to work with Microsoft as well as offering foreign governments a choice in operating systems — but if Negroponte’s suspicions about the popularity of Windows boosting sales ring true, we can’t help but feel this might be a tipping point for OLPC and Linux.