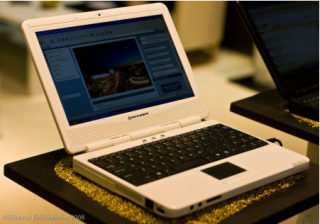 As it stands, pretty much every notebook and computer manufacturer in the business has come out with a "me too" version of the Eee PC so usually, it’s not really all that surprising to see yet another addition to the rush of netbooks and low-cost desktops we’ve already seen out there.

The UMMD 8010/F looks, as far as spec are concerned a lot like the rest of the netbooks already available. You’ve got a pretty standard 10 inch display, 1.3 megapixel camera, 80GB HD, 1GB of RAM, WiFi, optional Bluetooth. In fact, bar the fact that Commodore has decided (for some reason) to go with the 1.6Ghz C7–M CPU instead of falling in step with everyone else and opting for Intel’s Atom processor.

These fairly ubiquitous specifications are topped with a price tag that seems a little over the top for our tastes. Most netbooks these days are at most, around $500 and those that do cost that much have slightly bigger displays, extra RAM and a bigger harddrive. $600 is a little bit much for the Commodore UMMD, although we’re betting there’ll be a decent amount of people making impulse purchases out of nostalgia.

Oh, and did we mention that Commodore seems to still employ the same design team as they did in the 80s? Ah, beige, a timeless classic.