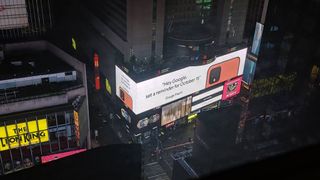 Google obviously doesn't want to preserve the element of surprise in this year's Pixel 4 unveiling.

After rumors had surfaced that Google is planning a new orange color for its Pixel 4 lineup this year, the company decided to unveil its plans before it even takes the stage at its press event on Oct. 15. And oddly enough, Google did it in one of the more visible ways possible.

In New York's Times Square on Tuesday night (Sept. 17), Google's Pixel 4 ads were running with the caption, "Hey Google, set a reminder for October 15." It says "Google Pixel 4" below that. But perhaps most importantly, the ads, which were on full display for everyone in Times Square to see, showed the top of the long-rumored orange Pixel 4.

According to several rumors, Google is planning a few versions of this year's Pixel 4 lineup, including a white and black version. The third version, which could be known as "coral," is the orange-like model in the ad. It's also been tipped in several recent rumors.

Of course, Google didn't reveal everything there is to know in the ad, like its final design, but the ad, which was captured in a photo by Reddit user LousyTX, clearly shows a square camera bump on the back, like the recently unveiled iPhone 11.

That's the same camera bump and backplate design we've been seeing in recent rumors. Those same rumors have confirmed that Google is planning a Qualcomm Snapdragon 855 processor in the device and on the front, might stick to a rather bulky bezel at the earpiece and chin of the screen.

Google this week sent out invites to a press event on Oct. 15, where it'll unveil the Pixel 4 and Pixel 4 XL. Until then, check out our Pixel 4 hub page to stay up to date on ever last leak.