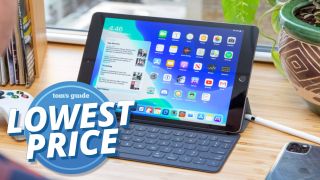 The new 10.2-inch iPad is Apple's most affordable tablet. Now Amazon is making it even more affordable in one of the best iPad Black Friday deals we've seen so far.

The 2019 iPad's biggest upgrade is its new 10.2-inch screen, which is an increase from its predecessor's 9.7-inch screen. The new iPad also offers support for Apple's Smart Keyboard, which lets you use your tablet more like you would a laptop.

Otherwise, it packs the same A10 Fusion CPU as its predecessor, which should still be sufficient for everything from playing games to streaming movies.

Make sure to follow our Black Friday and Cyber Monday deals coverage for the latest deals.