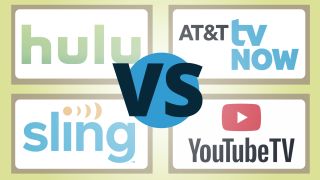 The big live streaming TV battle pits Hulu Live vs. YouTube TV vs. Sling vs. AT&T TV Now. Picking one of these services is crucial for those interested in cutting the cord. Many options look pretty compelling, though only one is staying below $30 per month.

Once limited to a couple of services, your options for streaming live TV have grown significantly over the last year, with Hulu with Live TV (which is getting a big price hike) and YouTube TV becoming dominant competitors.

Yes, Sling TV and AT&T TV Now (formerly known as DirecTV Now) aren't surrendering in the face of these new competitors. They also outlasted PS Vue — which couldn't take the heat, and exited the kitchen.

Sling went a while without a price bump, but all of its main packages just went up by $5 per month. Recently, the service added a free tier for its Cloud DVR, and it's also just added some big names in cable news. Earlier this month, Hulu with Live TV raised its price by $10 per month, so it's now $55 per month.

In an attempt to gain more users, YouTube TV is increasing its free trial length, from the standard 7-day window to a 2-week option — it was formerly 3 weeks at the end of 2019. On the desktop, YouTube TV's also improved its channel guide interface, so you can look a whole 7 days into the future.

But when it comes time to decide between the best streaming services, you'll also hear about T-Mobile's TVision service, though that's a much more premium option and is not part of this comparison. Oh, and don't even think about Apple TV Plus and Disney Plus, those are Netflix competitors.

The majority of these competitors have risen to at least $50 per month, while one is still affordable, meaning this is going to be one of the key places where you might make your decision in our Hulu Live vs. YouTube TV vs. Sling vs. AT&T TV Now face-off.

Hulu with Live TV costs $55 for its package of more than 60 channels, giving it both the largest starting price and one of the stronger selections.

AT&T TV Now charges more for less, with over 45 channels for $65 per month — which makes it the priciest service of the bunch.

At $50 per month for more than 70 channels, YouTube TV is not as expensive as some competitors, but not the most affordable option.

That title goes to Sling TV, which starts at $30 per month (formerly $25) for more than 30 channels. New subscribers to Sling — if they're willing to pay for 2 months up front, can get a free Fire TV stick.

YouTube TV offers six login accounts, but only three concurrent streams so while you can share it with your whole family, you might need to ask who's using it. Hulu with Live TV is slightly below that, starting with six profiles and two concurrent streams.

Hulu is the only one of these options with strong original programming (sorry YouTube TV).View Deal

Sling TV's entry level Orange package ($30 per month) offers one stream at a time, while its $30 Sling Blue includes three streams at once and its $45 Orange + Blue service allows four streams at once. For more details, check out our What Is Sling TV? page.

Hulu with Live TV, long separated from its early "beta release," can be accessed across the country. YouTube TV was only found in select U.S. markets at first, but as of March 27, it's available in all U.S. TV markets. Sling TV and AT&T TV Now are available in all 50 of the United States.

Verdict: Sling TV is the cheapest, but YouTube TV has the best dollars-to-channels ratio.

YouTube TV started off on a scant few devices but that's changing. On Feb. 1, it rolled out apps for the Apple TV, Roku TVs and most of Roku's other devices, such as the Ultra box, Streaking Stick and Express. This fills in another gap left by its initial launch, which was limited to TVs via Google Chromecast (either attached or built-in), Android devices and TVs running Android TV, iOS devices, Xbox One, Apple TVs via AirPlay and smart TVs from LG and Samsung. Support for Sony Smart TVs is expected in the first quarter of 2018. And finally, on Sept. 30, YouTube TV finally landed on Fire TV.

AT&T TV Now is available on Chromecast, 4th Gen Apple TVs, Amazon Fire TV devices, Roku, Android and iOS. Sling TV runs on all of those devices as well as select LG Smart TVs and the Oculus Go, compatible Samsung Smart TVs (including 2016 and 2017 models) and the Xbox One. DirecTV's parent company AT&T is talking to users about testing a new streaming box, one that will run Android TV apps, but boot directly into AT&T TV Now by default.

Hulu with Live TV is available on Amazon Fire TVs and Fire TV sticks, Android devices, Apple TV, Chromecast, iOS devices, LG Smart TVs, Macs, PCs, Rokus, Xbox 360 and the Xbox One. Hulu is also the only of these competitors to be available on the portable Nintendo Switch console. Hulu's now giving 1080p at 60fps streaming for select live channels, which is currently only on Xbox One and Apple TV HD and Apple TV 4K.

Verdict: Device availability is pretty even, and Hulu and YouTube have done a lot to catch up.

One of YouTube TV's biggest features is live streams of the major broadcast networks (ABC, CBS, FOX, NBC and The CW). Hulu with Live TV is the competitor that stacks up the best here, offering all of those except for The CW.

Sling TV's $25 per month package includes live streams of Fox and NBC, while AT&T TV Now only guarantees video on demand content for ABC, FOX and NBC, with access to live streams differing by region. On July 2, Sling announced its Broadcast Extra package, where its subscribers could access ABC, would be discontinued, and it blamed Univision for "an attempt to raise rates despite lower ratings."

If you just need CBS, its All Access streaming service — available starting at $6 per month — provides live streams of your local CBS station, along with access to a trove of on-demand movies and TV shows. While this service has been available since 2014, it's only recently drawn attention, because it's the exclusive home of the new Star Trek: Discovery program.

It should be noted that you can get local stations by simply buying an HD antenna for your TV, though that won't provide DVR or on-demand options (more on those later) to save shows for later.

Verdict: YouTube TV looks great for cord cutters worried about losing network TV channels, as does Hulu with Live TV (if you don't need The CW).

You can pay an additional, to be announced, amount of money for FOX Soccer Plus. The one sports channel that Hulu with Live TV and YouTube TV offer that nobody else does is CBS Sports.

As for what you're missing, NFL fans will probably want to check out Sling TV's $25 per month Blue package, which has NFL RedZone from the NFL network as well as many Fox Sports channels.

If you're a sports fan first, above all other media, you'd be smart to consider FuboTV. Its entry-level package costs $54.99 per month, and while its first month is no longer discounted, the service offers a free 1-week trial period to see if it's right for you. Its value proposition is much stronger, with 85 channels included.

The $40 per month you'd spend on Hulu with Live TV gets you a decent selection of cable TV channels, such as Bravo, Cartoon Network, Food Network and the History Channel. Unfortunately, it doesn't offer Viacom channels such as Comedy Central, BET, MTV and VH1.

Similarly, YouTube TV ($50) gives you a particular portion of the cable TV landscape, and leaves out quite a bit, including TBS, Comedy Central and Food Network. But if USA, FX, FXX, FXM, TBS, TNT, E!, Bravo, Syfy, National Geographic, Oxygen and the Disney channels sound like enough for you, then you should be fine. To try and make its recent price-jump more palatable, YouTube TV added Discovery Channel, HGTV, Food Network, TLC, Investigation Discovery, Animal Planet, Travel Channel, and MotorTrend.

Sling TV's $30 per month packages gives you other channels such as Comedy Central, History, Food Network, IFC, the Travel Channel and A&E, as well as upstarts such as Viceland, El Rey and El Rey. AT&T TV Now's $65 per month deal includes many of those, as well as MTV, Nickelodeon, Nick Jr. and VH1.

In terms of cable news, YouTube TV includes CNBC, CNN, Newsy, Fox News and MSNBC. AT&T TV Now's entry-level packages offers all of those channels, save for Newsy, and Sling TV's $30 Orange package gives you CNN, BBC World News, Newsy and Bloomberg, and its $30 Blue package has those, plus Fox News, MSNBC and HLN.

If you'd rather just buy one channel and not a whole package, consider Amazon Channels, an ala carte alternative to subscription services.

Verdict: YouTube TV offers an ever-increasing array of programming, but it's still missing some channels (Comedy Central, Food Network) that are likely essentials for some. Our YouTube TV channels guide packs all the full details about that service.

YouTube TV includes a cloud-based DVR service with an unlimited amount of storage, a perk none of its competitors can touch. We found that the services "makes it trivially easy to record shows you want," and that the competition "could stand to learn a thing or two from YouTube TV in this regard." YouTube TV also offers On Demand content, though not for all shows. YouTube TV just improved its DVR, allowing you to skip ads in programming recorded on CBS, Smithsonian and Pop TV.

What's sweeter than unlimited DVR space? Full control of your recorded shows! Starting today, you can ️⏸, ⏪, & ⏩ through your @CBS, Smithsonian Channel, & POP TV favorites to your heart's content.December 2, 2019

Hulu with Live TV, though, beats Sling with 50 hours of Cloud DVR for free. Its paid DVR tier costs $15 more per month to bump you up to 200 hours.

AT&T TV Now offers On Demand content available "within hours after a program airs" for "up to 20,000 shows and titles based on your subscription package." AT&T TV Now recently announced that the Beta version of its cloud DVR service will soon exit beta testing, ending the free 100-hour tier, and switching those users to 20 hours, specifically the most recently recorded 20 hours in an account. Once we see this DVR move out of beta, we'll update this section of our Hulu Live vs. YouTube TV vs. Sling vs. AT&T TV Now face-off.

Verdict: YouTube TV is the best for those who can plan ahead and record, and even offers content for catching up. Hulu's DVR is close, but capped at 50 hours of content.

Hulu with Live TV and YouTube TV are contenders, but not the champ by any stretch. Incomplete channel selection means they're not for everyone, but YouTube TV's increasing number of supported devices is improving its credibility. But if you need broadcast TV and live sports and want a super-simple Cloud DVR, it will certainly suffice. Otherwise, you're better off with the rich selection of Sling TV.