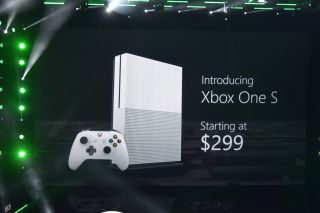 LOS ANGELES — If there’s one takeaway from Microsoft’s E3 2016 showcase, it’s that the company is shattering the barriers between platforms. Virtually every game shown off at Xbox’s show is part of the new Xbox Play Anywhere initiative, which allows you to buy a game once and play it across Xbox One and Windows 10. You’ll also be able to play those games on two new consoles: the slimmed down Xbox One S hitting later this year, and Project Scorpio, a 4K gaming powerhouse slated for late 2017.

Of course, Microsoft’s E3 show was still very much about games, and we got great new looks at Gears of War 4, ReCore and Forza Horizon 3. Here are our personal highlights.

Microsoft finally took the wraps off its long-rumored slimmed-down Xbox One console, and boy is it pretty. The Xbox One S touts a svelte white design that’s 40 percent smaller than the original model, complete with 4K streaming and Blu-Ray support and up to a whopping 2TB hard drive. Best of all? It starts at just $299.

Project Scorpio: The Most Powerful Console Ever

Xbox One S is just the beginning. In late 2017, Microsoft will launch its “Project Scorpio” console, which promises to have the most powerful graphics card of any game system. Powered by an 8-core CPU and 6 teraflops of graphics power, Scorpio is designed to power 4K and virtual reality gaming with ease. Scorpio will play all Xbox One games when it launches, but you won’t be required to splurge for one – Microsoft promises that it will continue to support all versions of the Xbox One.

Gears of War is synonymous with co-op, and the third-person shooter’s blistering E3 demo shows just how dynamic playing with friends can be. When our new COG heroes found themselves up against a turret, one player used a cannon to launch an exploding rock into the air, while another shot that rock out of the sky to rain fire on the enemy below.

We also saw some brutal new executions, as well as a devilishly fun-looking weapon that shoots boomerang-like blades that bounce off walls. Extreme weather seems to be a key gameplay component. We finally got a look at original Gears hero Marcus Fenix, who’s looking old, bearded and more badass than ever.

Gears fans can also look forward to a special Gears of War version of the Xbox One Elite Wireless Controller. Finally, series villain General Ramm is joining the cast of Microsoft fighting game Killer Instinct, which is free to try this week.

We finally got to see ReCore in action, and it’s looking like a fun mix of shooting and platforming complete with a bunch of cool robot companions. You’ve got Mack, the robo-dog who can blow enemies up; Seth, a sneaky spider bot that helps you latch onto new platforms, and Duncan, a big bruiser who exists to inflict damage. We’re excited to see what else we can do with our mechanical friends when the game launches on September 13.

Gears of War and ReCore weren’t the only big games in Microsoft’s first-party lineup. Forza Horizon 3 brings a new layer of over-the-top action to the arcade racer series, as you’ll be able to bounce around the desert in a dune buggy and skim along the water in the beaches of Australia in a Lamborghini. Strategy game Halo Wars 2 will pick up right where the original left off when it hits next February, and there’s a week-long open beta that you can play right now.

We have a much better idea of how pirate-themed MMO Sea of Thieves will play, and gearing up your ship, launching cannons at enemy pirates and getting your character drunk looks like fun. We also saw a co-op portion of upcoming action-RPG Scalebound, in which you and your pals will be able to team up to take down some astonishingly massive dragons.

On top of new games, Xbox One is slated to get a bunch of long-requested Xbox Live features. This summer, you’ll finally be able to play your own background music while gaming on Xbox One, as well as bark voice commands to Microsoft’s virtual assistant Cortana. You’ll also be able to more easily find teammates to help you play your favorite games, as well as compete in online tournaments for titles such as Smite and FIFA.

Best of the Rest

Microsoft’s E3 event was a nonstop assault of new games, but there were still plenty of standouts. Zombie fans can look forward to the slapstick, Christmas-themed action of Dead Rising 4, as well as the more serious, survival-minded adventures of State of Decay 2.

Tekken 7 sports a stunning story mode that transitions seamlessly between cinematics and real-time fighting. Much to the crowd’s delight, CD Projekt Red revealed that Gwent, the insanely popular card game within The Witcher 3, will be getting its own standalone release.