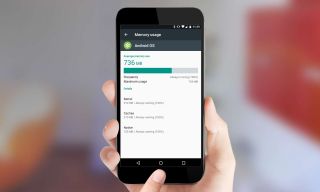 Android Nougat retains the memory management feature introduced in Marshmallow, with RAM Manger still providing lots of useful information. With RAM Manager, you canhunt down an app that's eating away at your phone’s memory, making it the first place you should turnwhen the performance of your Android phone seem out ot of whack.

MORE: How to Use Android Nougat's Quick Switch Feature

Here's how to find the RAM Manager in Android Nougat, and what information will appear when you use this feature.

1. Open the Settings by swiping down with two fingers on your smartphone's screen and touching the cog.

2. Scroll down and touch Memory. On the next screen, by default, you'll see an overview of the phone's memory usage in the past three hours. This section also displays a performance rating, the total memory used, an average usage displayed as a percent, and the amount of RAM still free.

If you want, you can adjust the time period that RAM Manager displays for your memory usage. Here's how.

1. Touch the tab at the top to change the time period.

2. From the drop-down menu that appears, select the increment of time you want — 6 hours, 12 hours or one day.

You can also get more details about how much memory other apps are using.

2. You’ll see another list of apps or even parts of the Android operating system. For example, touch Android OS. This will give you more metrics about how much of your system’s performance is being used.

3. You can also touch an app to get similar details about the app’s performance — in this example, Photos.

If the app is giving you problems, you can force stop or uninstall it from here. You can also check out if an app is set as the default application for any type of function.